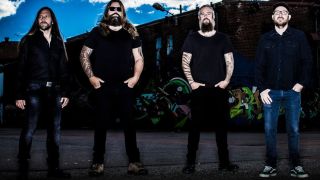 In Flames have released a short album trailer detailing the work that’s gone into making their upcoming 12th album, Battles.

The follow-up to 2014’s Siren Charms will be released on November 11 via Eleven Seven Music.

In the short clip, vocalist and lyricist Anders Friden explains the meaning behind the album title, and reports it was inspired by emotional conflicts which affect people on a daily basis.

Friden says: “All titles for every album come really late in the process. I write the lyrics and then I gather all the lyrics after we’re done and I look at the album as a whole, then try to figure out what the theme is.

“With Battles, we all have our inner struggles from the day we are really young up until the day we die, so this album is about that and something everyone can relate to.

“We all have it – you can never get away from it. It could be inside and outside, between all kinds of people with all kinds of situations.”

The cover art was once again created by artist Blake Armstrong who worked with the band on Siren Charms. And although Friden was happy to let him stamp his own creativity on the sleeve, the singer had some ideas of his own when it came to the overall design.

Friden adds: “When we recorded this album in Los Angeles, all of us on several occasions went into comic book stores. Every time I see a comic, I think the covers are really cool – sometimes what’s inside is not as good but he cover art is always special.

“Blake the artist, I want to give him inspiration to draw – I don’t want to tell him exactly what to do. I give him he lyrics, I present the overall theme and say, ‘Go crazy.’”

Last week, the band issued Battles track The End, and they’ve also released a stream of The Truth from the album. Listen to it below.

Guitarist Bjorn Gelotte recently stated that switching recording from their previous base in Berlin for Siren Charms to LA gave the band a “different energy” while in the studio.

In Flames have a couple of live dates scheduled in November. They’ll then return to the UK for an eight-date tour in early 2017.

Under The Influence: How In Flames Changed Metal