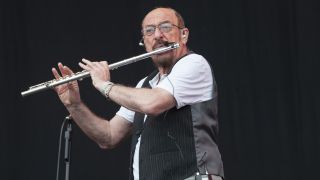 Ian Anderson has revealed a list of his 10 favourite folk-rock albums.

And while he credits artists including Roy Harper, Pentangle and Fairport Convention, he reserves special praise for English singer/songwriter Seth Lakeman.

The Jethro Tull icon tells Music Radar: “He’s someone who I think has a musical approach that belongs right back in the early 70s but he’s doing it in the new millennium. To me he does it in a very familiar-sounding way.

“Poor Man’s Heaven brought him into the more rock field and it’s more rhythmic and a lot more solid in the bass and drums department.

“For me, he definitely qualifies as today’s top folk-rock musician.”

Another album to make the shortlist is Steeleye Span’s Parcel Of Rogues from 1973. And while Anderson is credited as the producer on its follow-up, 1974’s Now We Are Six, he’s quick to play down his contribution.

He says: “I only really ‘produced’ in the sense that I supervised the mix – other than getting David Bowie to come and play saxophone on one of the tracks!”

After The Break – Planxty