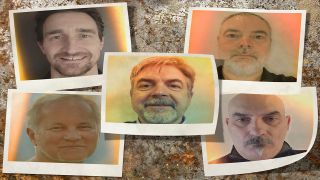 Also Eden have revamped their line-up, with founding members Huw Lloyd-Jones returning as singer and Ian Hodson on keyboards. They replace singer Rich Harding, who actually replaced Lloyd-Jones in 2010, and Andy Rigler.

Also returning to the fold is bassist Graham Lane, who featured in the 2012 incarnation of the band and drummer Dave Roelofs, who had appeared with guitarist Simon Rogers, Lloyd-Jones and Hodson when Also Eden played Night Of The Prog in 2009.

“Also Eden has always featured something of a revolving door, when it comes to members,” Rogers tells Prog. "So as well as Rich, we also offer sincere thanks to Andy and all the other contributors to the band's story so far.

"We are thrilled to announce that this new (old) lineup will be appearing at The Winter's End Festival in Chepstow, April 23-26, 2020. This was originally envisaged as a one-off gig, but – with the enthusiasm generated among the band's fans and offers coming in from numerous sources since the announcement – it looks like Winter's End will just be the start of the next chapter.

"Already planned for 2020 is the partial re-recording, remixing and re-release of Also Eden's debut album, About Time. The drums will be re-recorded entirely by Dave and these new recordings will be mixed with new and original guitar, bass, keyboard and vocal parts.

“Recording About Time was a wonderful experience, but it was really pushing the boundaries of home recording at the time. Technology has come on incredibly since then and the opportunity to improve on the sound, right some mistakes and generally improve the overall quality of the record is just too good to resist.”.

"The remastered About Time will be released as a limited edition vinyl with new, expanded artwork and also on CD with a bonus track. Also Eden's second album, It's Kind of You to Ask, will be the next to be revisited and a remastered vinyl edition is provisionally planned for 2021."

“It's great to be revisiting these old favourites”, says keyboardist Ian Hodson, “but the new material is what's really exciting me. Oh, I'm sorry: was I not supposed to mention that?”

Harding will now concentrate on his own solo material as well as All Night Chemists and Neo Deals.