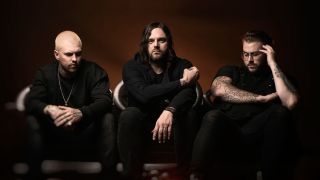 Speaking to Hammer about the The Prestaliis, which is due for release on August 11, Cory says the the record is a “fictional catastrophic event told in a conversation between the earth and the sky,” which ends with the destruction of both.

“The concept is that it sets off a series of other events told through various characters and conversations throughout the album. I tried to write all of the lyrics where they could come from the minds of either person or entity and get a new meaning or emotion out of it.

“All of the themes teeter between acceptable and non-acceptable behaviour or thoughts. I didn’t want to force anything into the songs. I tried to listen for what I thought the song sounded like and write with that emotion in mind.”

Hundred Suns have already released two songs from The Prestaliis, including their first official video for Amaranthine.

“Amaranthine is specific with its topic of human trafficking,” explains Cory, on the meaning behind the song. “The conversation is between a victim and their perpetrator. Listen to that entire song coming from either character, in any order, and I think you’d be forced to dive into the depths of the content behind The Presataliis as a whole. Either character could be saying those lines and it gives the song new meaning depending on how you arrange them.”

Cory continues to describe some of the stories that inspired the record. Fractional is a conversation between two people that want to end their relationship. “They are both going to find a way to break away clean but can’t unless the other person is destroyed,” says Cory. “They’ll lie to themselves to bend and break the other person.

“I like writing about things we think that we don’t necessarily want to talk about.”

Hundred Suns’ debut album The Prestaliis is out August 11 via New Damage Records and is available to pre-order now.

Every Every Time I Die Album Ranked From Worst To Best