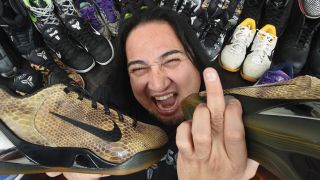 OK, DINO: SO WHAT’S YOUR DEAL WITH SHOES?

“It started with my brother Joey, who played professional baseball. I’d always get his hand-me-downs, so when I got my first pair of Nikes from him, I learned how to clean them up and make them look new so I could rock them at school and play some fucking kickball in them! Kids would go, ‘Those shoes are badass!’ It was a thing when I was a kid and it’s continued through to now.”

IS THERE AN OFFICIAL, GO-TO DINO CAZARES STYLE?

“My favourite company is Nike and one of my favourite basketball players is Kobe Bryant of the LA Lakers. He puts out great sneakers every year and they number every version, so the first year was the Kobe 1 style, the next year was Kobe 2s, etc. Now he’s into the Kobe 10s and I’ve been collecting them since day one, so I have a shitload of Kobe shoes. On the Nike website, you can order a custom pair and since 2001, for our live shows, I’ve been wearing custom all-black Kobe shoes onstage. I call them ‘The Blackouts’. I buy a new pair every album cycle and wear them every night.”/o:p

EXACTLY HOW MANY PAIRS DO YOU HAVE?

“I didn’t know until we started pulling them out. I stopped counting after 50. I’m looking in the closet and thinking, ‘We haven’t come close to pulling them all out and we’re running out of room to set them up for this photo.’ Maybe there’s another hundred in there? I’ve never really counted.”

BE HONEST – WHAT’S THE MOST YOU’VE EVER DROPPED ON ONE PAIR OF SNEAKERS?

“Just recently I spent $600 on a pair. Why? Because I had to have them! Ha ha ha! They’re snakeskin Nike Kobes. And no, they’re not real snakeskin, but they look pretty close to it. You know Ratt? Remember Warren DeMartini’s snakeskin Charvel guitar? I always wanted a guitar like that and when I was finally able to get one, I thought, ‘Hmmm… what goes with this guitar? Shoes!’ I had to find the snakeskin Kobe shoes and they’re expensive because they’re rare. Not just anybody is going to drop $600 on a pair of shoes, but I will!”

“That describes me in a different way. This applies to me and my wife. When I see a girl walk by and she’s got some nice high heels or a certain pair of shoes on, I picture my wife wearing those shoes, so BOOM, I’ve gotta go get her a pair of shoes. And she likes it because what girl doesn’t like shoes? Plus I like my wife looking hot in a nice pair of fucking high-heeled pumps or boots. So that’s where the sexual fetish comes in, because she’s looking hot!”

HAS YOUR DOG, DIABLO, EVER GOTTEN INTO YOUR SHOES?

ON A SCALE OF ONE-TO-10, HOW METAL IS SHOE COLLECTING?

“Look at early pictures of Metallica and look at Testament. Back in the early days, you’d see them all wearing either a leather jacket or a sleeveless t-shirt, tight pants and some fucking high tops and I used to dress that same way, back when I was first getting into thrash. So it’s very, very metal.”

A NEW FEAR FACTORY ALBUM WILL LAND LATER THIS YEAR/o:p

Diablo knows eating Dino’s shoes is forbidden. Drooling in them, however…

If you fancy walking in the footsteps of our Dino and picking up some sexy snakeskin numbers, head to the official Nike store where you can nab a pair of Kobe 9 EXTs for a hardly minute £220.

Yes, there’s even a book: Sneakers: The Complete Collectors’ Guide is published via Thames & Hudson. You can purchase this shoe-lovers’ bible via Amazon for the fairly reasonable sum of £14.

If you’re really fucking keen on immersing yourself in the world of shoes, you can head to the States and meet up with a few thousand similarly minded souls at the travelling Sneaker Con. See sneakercon.com for more info./o:p