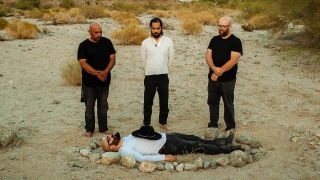 Here Lies Man, the genre-busting project started by Antibalas guitarist Marcos Garcia, are streaming their cover of Fela Kuti’s 1977 classic Sorrow, Tears and Blood. The original song was released by Kuti as a response to a state-sponsored attack on his Kalakuta Republic compound in Lagos, during which Nigerian soldiers threw his mother out of a second floor window, causing injuries that eventually led to her death.

“Sorrow, Tears, and Blood was the first Fela track I’d ever heard,” says Garcia. “I had it on repeat and with every listen it gave me chills. The track made an indelible impression on me and from that point forth all of my musical endeavours were influenced by Fela’s music.”

Sorrow Tears And Blood is from Here Lies Man’s upcoming Animal Noises EP, which kicks off with the title track and also features a Chico Mann remix of You Ain’t Going Nowhere, the original of which is taken from the band’s critically-acclaimed, self-titled debut album.

The album mixes Afrobeat rhythms with Western, riff-orientated heavy rock. “The repetitive guitar figures that happen in Afrobeat music are ​very close to heavy rock guitar riffs,” says Garcia. “This music is based on the clave. It’s the musical algorithm that the rhythms revolve around. ​It’s what gives it integrity and ​provides the basis for the musical conversation ​that’s happening. I knew I wanted it to be psychedelic and heavy, and I wanted to be expanding on a musical tradition ​rather ​than pretending to be creating something new!”

Animal Noises is released on November 24 via Riding Easy Records. Here Lies Man play some UK and European dates in February and March next year (see dates below).