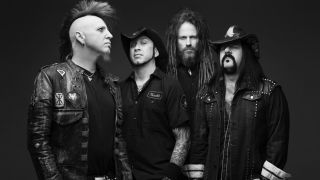 Hellyeah guitarist Tom Maxwell says the band made a conscious decision to drop their party-rock tag on Blood For Blood.

Their fourth album launched last year with bassist Kyle Sanders admitting they had a lot to prove following the departures of Bob ‘Zilla’ Kakaha and Greg Tribbett. Now Maxwell says they used the album to ditch some stereotypes surrounding the group.

He tells the Vinnie Langdon Show: “I think we really needed to dig deep on this one. I wanted to break that stereotype people had of us as this party-rock band, which kind of put us in a corner with songs like Alcohaulin’ Ass, Drink Drank Drunk and Hell Of A Time.

“They’re cool tunes, but, personally, I don’t have any history with that kind of music. I’m a hardcore kid from Baltimore and I want to play moody, emotional, heavy stuff and more relaxed, pulled-back stuff but retaining integrity and honesty. I just didn’t think that that was the way that we should be going.”

Maxwell also credits producer Kevin Churko with getting the most out of the band on the record and reveals he now wouldn’t want to work with anyone else but Churko in the future.

He adds: “None of us had ever met him but we knew what his body of work was – but it was that extra ingredient that we really needed to fine-tune the band.

“He did a fantastic job. In fact, I really don’t want to work with any other guy down the road or when it comes down to doing music and recording. That’s the guy I want to go with.”

Heallyeah will appear at this year’s year’s Download festival at Donington Park on the weekend of June 12-14. For more, visit the official website.