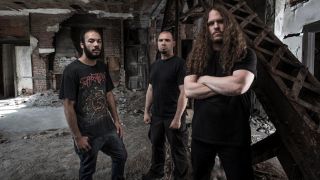 Long established as one of the most extreme and technically dazzling bands in death metal, Hate Eternal are about to reconquer the brutality throne when they release long-awaited sixth album Infernus in August.

Taken from it, Pathogenic Apathy is a typically furious and incensed explosion of churning riffs and neck-snapping blastbeats, produced to malevolent perfection by the band’s founder and sonic overlord Erik Rutan. If a lot of modern death metal seems a little bit too formulaic, Hate Eternal continue to espouse their own uniquely vicious musical ethos, wherein aggression and flat-out metallic oomph are the bedrock upon which Rutan’s unearthly tirades are built. Approach with caution: this band will cheerfully rip your face off.

Infernus is released 21st August, via Season Of Mist.