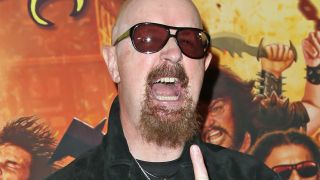 Rob Halford has spoken of his joy at seeing Queen performing with Adam Lambert – and says he hopes Motley Crue's final tour turns out not to be their last.

The Judas Priest frontman says on Nikki Sixx’s Sixx Sense radio show: “I’ve been a huge Queen fan since they began. I actually went and saw some of their very, very, very early shows in England, and they just blew me away. I just couldn’t believe it. These guys were doing extraordinary things for that time in rock and roll.

Queen’s Brian May and Roger Taylor have launched a North American tour with American Idol finalist Lambert in place of late frontman Freddie Mercury – and Halford thinks it’s the right move. He says: “It’s just great to see the guys out on the road. They don’t need to go out. They’ve got all the gold and platinum albums. But what they’re doing is a sincere display of their love of their music. So I wish them all the best.”

Crue announced this year they were to embark on their final tour, with the band members signing a legal contract preventing them from performing under the band name afterwards.

But Halford tells bassist Sixx: “I sincerely hope that you guys do something else. There will be a void if you guys suddenly just vanish. I know it’s the farewell – but a lot of us hope it’s not.”

Priest’s new album Redeemer Of Souls is out next week.