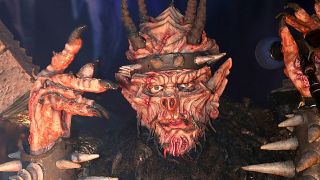 Gwar have announced the creation of a charity foundation in memory of mainman Dave Brockie, who died last month.

The 50-year old is best remembered as Oderus Urungus, frontcreature of the alien thrash band. He was found dead at home by his bandmates, who say he “passed away peacefully in his sleep.” No cause of death has yet been confirmed.

The surviving members of Gwar are also planning to place a monument to Brockie in the band’s hometown of Richmond, Virginia, and they’ll hold a public memorial there on August 15.

The say in a statement: “We would like to thank fans and friends for their outpouring of love. Our intention is to honour Dave, preserve his legacy and continue to share his brilliant works with the world.

“The Dave Brockie Foundation is a charity with the mission of promoting the advancement of music, images, letters and performance in the arts. It intends to be a support system to those who have dedicated their lives in pursuit of creativity. It will encourage promising talents as well as preserving the legacy of Dave’s work.”