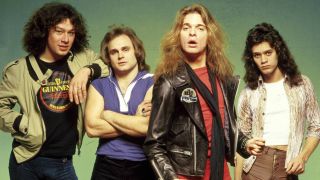 “There was only a short period where Van Halen were top shelf, but from ’78-’84 was when the magic was happening,” says Starr. “Nobody could duplicate that. When you went to their shows you were guaranteed to laugh and have a good time. And I want to be entertained; I don’t want to watch people just stand there and stare at their shoes. Van Halen had charisma. They were funny and sexy at the same time.”

We set Starr the challenge of picking his 10 favourite tracks from the Roth-era Van Halen, but he said he couldn’t rank them in descending order because “they’re all awesome and they all represent something different.” So he just went through the albums in chronological order instead.

“Feel Your Love Tonight stands out for me because they played it when I saw Van Halen live for the first time in LA, and when the music broke down and they went into the three part harmony with David Lee Roth, Michael Anthony and Eddie Van Halen it was so awesome. It’s also just a fun party song.”

“Next would be Beautiful Girls, man. Who doesn’t love hot chicks? And when you sing about them it makes them happy. Whenever I think of Beautiful Girls I think about girls in jean shorts cut off really high so you can see their butt. And there’s really nothing better than short shorts, tanned skin and blond hair. You know what I mean?”

“This is another song off Van Halen II. It’s a bitchin’ song because of the harmonies and the solo, and I’m not going to say that it’s easy to play but it was one of the first Van Halen songs that I learnt to play on rhythm guitar, so it’s a very important song for me.”

“There’s a scream that David Lee Roth does in the verse to this song, and that’s what inspired me to first start learning how to scream. I would try and imitate what he does and I had a hard time perfecting it but I kept on trying because I really liked it. I’d come to find out years later, after meeting him, that it’s a super soft falsetto scream, but it doesn’t sound like that on the record - it sounds like he’s screaming at the top of his lungs.”

“This is a song that I relate to John Bonham’s death. I remember hearing the song on this radio station in LA whilst I was in my uncle’s car and he was like, ‘This is a killer song!’ Then right after the song was done playing they announced that John Bonham had died. So it always sticks in my head for that reason. It was like, ‘Here’s the new Van Halen song… Led Zeppelin’s drummer’s dead.’ Bittersweet, man.”

“I fucking love this song, dude. The lyrics in the verses were Roth doing this new blues thing, and the chorus line rings so true to me because everybody wants some of whatever the fuck it is - everybody wants blow and everybody wants chicks. It’s true. So the chorus always stuck out, and it’s a really fun party song with a nice little jungle feel at the beginning. I found out later that he improvised the middle part too, where he’s singing about ‘the way the line runs up the back of the stockings.’ That’s fucking bad ass.”

“Let’s have Unchained next. This song was a big influence on me. I love this song. It’s probably the coolest heavy metal radio-friendly song ever written. It’s fucking badass. It’s like Round and Round by Ratt, but three years prior. They were both number one hits, but also full-on rock songs, and Unchained was the first metal song to do that. It’s short and sweet, with a bitchin’ solo, killer vocals and great harmonies.”

“You’re gonna kill me for this one, but next is gonna be Panama. I had a buddy at high school called Dave and he came up to my house one day and said, ‘Dude, I heard the new Van Halen song. It’s called Tell Your Mom. It’s so killer.’ And then I heard the song and I was like, ‘That’s not called Tell Your Mom, it’s called Panama.’ This was obviously before the Internet and cell phones, so you’d have to listen to the radio for like three hours to be in with a chance of hearing your favourite song. So that’s how I remember that one.”

“This song was a departure for David Lee Roth vocally because he actually sang a super high melody, which sounded completely different to anything he’d ever done before. And that made me want to broaden my horizons and try something different as well. It was really fun to watch Van Halen get bigger and bigger around this time, too. Every single they put out was on the radio all the time, and I truly felt justified in my love for the band by this point.”

“It’s so clichéd because everybody knows it, but I have to put Jump in there. That would probably be my number one song by Van Halen because it’s not only a super killer rock song, it’s also a pop hit. And it has keyboards rather than guitar riffs, which was something completely for them. They really stepped out of their box and it sounded killer, and the combination of the video and the song made it even greater. You can’t argue with a song that everybody’s mom knows either. This song hit a chord with everybody, man.”