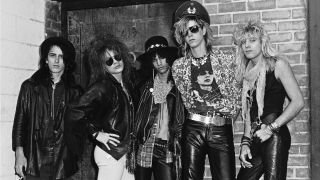 A book charting the early days of Guns N' Roses is to be turned into a feature film.

The movie version of Marc Canter’s authorised biography Reckless Road: Guns N’ Roses And The Making Of Appetite For Destruction has been in the works for around four months and will feature a cast including a few A-list stars – although they have not been named as yet and no release date has been set.

Canter tells MyGNRForum: “I do have a big say-so on the script, which is still being put together now, but so far it’s looking cool.

“I am going to see that everyone in the cast is doing their job and doing justice to the band. Since I was there, I know what the dialog was between the band for many of the events that took place.

“When you find out who is making the movie, you will then understand that it will be very cool. I’m proud of all the hard work that was put into this project and it’s just going to kick ass. In no way will it be a cheesy movie like Rock Star.”

Canter is the owner of rock hangout Canter’s Deli in Los Angeles and says “there really is such a great story here.”

He doesn’t have the support of Axl Rose, but he vows to clear up some of misconceptions surrounding the singer’s behaviour in the early days.

Canter adds: “Axl doesn’t support anything to do with the old band except playing their songs live. However, I do think he will be happy with the fact that it will clear up some stories that have been said about him from those days that were told incompletely. So setting the record straight on some of those events will be a good thing for him to see happen.

“Axl should know by now that I have his back and that it will be done right. If I’m involved in a GNR project, then you know I have their backs. There is a great story about the birth of the band which I was very much involved in.

“This has nothing to do with where the band is today. The history is very important and that’s why Axl was the one who was most supportive of me documenting what they were doing when they first started out.”

Canter’s relationship with the band came about through his friendship with Slash, whom he has known for 35 years. Reckless Road was published in 2008 and includes exclusive photos shot during the Appetite For Destruction tour.

You can read all about the early year’s of Guns N’ Roses in the new issue of Metal Hammer. Pick up your copy here or read it on TeamRock+.