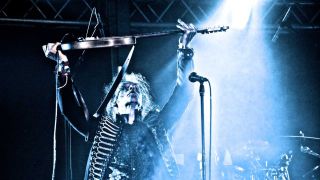 Guitarist Bernie Tormé has died at the age of 66.

The news was confirmed in a statement from Tormé's family, who said, "Bernie Tormé passed away peacefully on the 17th March 2019, one day short of his 67th birthday, surrounded by his family. He had been on life support for the past four weeks at a London hospital following post-flu complications.

"Bernie will be remembered for dedicating his life to his music for five decades. He will be sorely missed."

Bernie's bandmate Mik Gaffney added, "On a personal note, I can only say how much I will miss him. I've known him since the late 80's. It's been a privilege to be his drummer for the past couple of years and his friend for much longer. It's a struggle to convey the emotion into words."

The news comes little more a month since the guitarist was admitted to hospital suffering from virulent pneumonia in both lungs.

Tormé was born in Dublin in 1952, where he learned to play guitar. In 1974 he moved to London, joining bassist John McCoy in heavy rockers Scrapyard.

In 1981 Tormé left Gillan, and joined Atomic Rooster as a session guitarist. The following year briefly joined Ozzy Osbourne's band, stepping in for Randy Rhoads in the aftermath of the guitarist's tragic death. Ozzy Osbourne told Total Guitar that if it wasn’t for Bernie Tormé he “might never have got back on a stage”.

He then formed Bernie Tormé And The Electric Gypsies, and in 1988 joined Desperado, the band formed by Dee Snider after Twisted Sister were disbanded, playing on their only album, Bloodied, but Unbowed.

Snider tweeted, "Woke up to find out my friend @Bernie_Torme has died. He was a guitar god who played with @OzzyOsbourne & Ian Gillan. We worked together for 3 years, writing over 100 songs for the ill-fated Desperado. I loved that man & today my heart is broken. RIP Bernie. Your guitar weeps."

Tormé released his latest studio album Shadowland in November last year, but his family reported that PledgeMusic – who say they’re working on a solution to address late payments to artists – still owed the guitarist £16,000, which was due to be sent to him in December.

In response, fans set up a JustGiving page to raise the money.

Woke up to find out my friend @Bernie_Torme has died. He was a guitar god who played with @OzzyOsbourne & Ian Gillan. We worked together for 3 years, writing over 100 songs for the ill-fated Desperado. I loved that man & today my heart is broken. RIP Bernie. Your guitar weeps.March 18, 2019