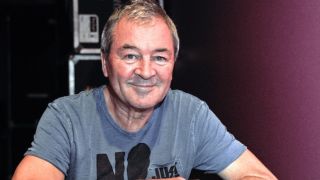 Ian Gillan seems almost surprised at how much Gillan packed into such a short space of time.

“We did five albums in just three years,” says the vocalist. “That seems like a lot these days. But back then, it was almost taken for granted.”

As singer, band leader and focal point, Gillan now has nothing but the fondest memories of the period.

“We had so much fun, and everyone involved with the band was great to work with at the time. I loved what we did. And we had such a large, loyal fan base. I’m sure they’ll appreciate digging out these albums from the vinyl box set and playing them again.”

But the man who fronts Deep Purple now is less certain about any possible Gillan reunion.

“I can see us meeting up for a drink, if that’s what you mean by reunion. But as to playing together again… I doubt that’ll happen. Apart from anything else, where would I find the time? I am now in the happy position of turning down offers, because I’m so busy.

“Maybe it’s also a good thing to leave people with their great memories of Gillan, the gigs we did and these albums we recorded.”

“I think the catalyst for this album was the song Fighting Man. Colin Towns (keyboards) wrote it out of frustration, and as soon as I heard this, I really liked where it was going. But the rest of the band at the time laughed and took the piss out of it. You see, Fighting Man was very different to the style of music we were playing during the late 70s, which was in the jazz fusion area. However, I felt this more rocking direction was where we should be going, and the fact the others believed it was a joke was enough to convince me we had to dissolve the line-up and revamp the band. And Gillan, as everyone knows it, was born.

“We actually recorded the whole album without a record deal. Once it was done, myself and my co-managers, Phil Banfield and Carl Leighton Pope, phoned up every label and music publishing company trying to get interest in the album. But nobody wanted to know. Until we finally got in contact with Acrobat, who said they’d take it. So, they released it, but within a week it had disappeared; the company hadn’t paid the pressing plant. However, it had done well enough just in that one week to convince all those labels who had rejected us to get back in touch and say they now wanted Mr. Universe! In the end, we signed to Virgin, who did a great job in marketing the record.”

“Ah, our first proper album for Virgin. It has Unchain Your Brain on it, and that’s one of my favourite rock songs of all time. It was just so fast. Ritchie Blackmore once said that writing a mid-tempo song is easy, but doing a fast one is hard. Well, it doesn’t come much faster than this. I remember getting Joe Satriani in to do the guitar part when I re-recorded this for Gillan’s Inn (2006), and he couldn’t believe how fast the tempo was.

“The cover for Glory Road was interesting. We had a rubber stamp of the logo we’d use on letterheads when writing to fans. Now, Virgin had commissioned a young design company to come with the cover, and they had several ideas. None of which we liked. So, we had the notion of using that rubber stamp on the sleeve. Well, we did that, and we had that cover, plus all the ones from the design company lined up one day in the Virgin offices, when Richard Branson walked through. I just said to him, ‘Richard, which cover idea do you like?’. He looked at them, and went for the rubber stamp, before walking on. So, you could say Richard Branson chose it!

“We also included a bonus album called For Gillan Fans Only. Now, I am a huge Elvis fan, and he had once done an album called For Elvis Fans Only, so we adapted the idea. It had a cover of Elvis’ Trying To Get to You, plus a load of silliness and nonsense. I thought it was a good idea to give this away, so fans got a double album effectively for the price of one.”

“This is the one with No Laughing In Heaven, which is definitely my favourite Gillan track. It was really the start of me being publicly irreverent. It harked back to when I was 13 years old, asking questions at Sunday school like, ‘Father, what was the immaculate conception?’, and getting answers like, ‘You have to have faith in God, my son. Faith will guide you’. And I began to realise that I didn’t believe in religion, and that God didn’t create Man, it was the other way round. The idea of going to heaven was anathema to me. The last thing I want to do is be stuck in heaven with the sort of people I’d like to avoid! That’s where this song comes from.

“Some of the tracks here, like Night Ride Out Of Phoenix and (The Ballad Of) The Lucitania Express, were based on actual incidents which happened to us on the road. I always like doing that sort of thing.

“I realise that a lot of people think the album cover is rubbish. It was certainly a bit strange. But some of the photos inside were amazing. Future Shock came in a gatefold sleeve, and it was a great visual production effort by all concerned.”

“A double album, with one disc being from the studio and the other live. Most of the latter came from the Reading festival in August 1981. And we had a different guitarist on the studio tracks to those done at Reading. The reason was that Bernie Tormé, who had been our guitarist since Mr. Universe, quit the band. What happened was that we were on tour in Germany, and had two days off. Virgin had got us onto Top Of The Pops to promote No Laughing In Heaven, and were prepared to fly us back to do it. Well, Bernie refused to go. His argument was that two days off meant two days off. But I wasn’t prepared to let Virgin down. I told him I was doing it, as were the rest of the guys. It was up to him what he did. In the end, Bernie decided not to get on the plane back to London, and that was it. We actually did TOTP without a guitarist; the cameramen worked round the problem.

“I called up Janick Gers (his band White Spirit had previously supported Gillan on a UK tour) and asked him if he’d like to replace Bernie. He had just a day or so to learn our set, but did it. Janick was a great replacement. Superb guitarist, but then Bernie also did a fine job for us.

“Now I don’t know who suggested doing a double album. I have a feeling there was no plan in advance, but the idea evolved. That’s the way things happened back then. I was also lucky in that I owned my own studio in London (Kingsway), so we could just go in whenever we felt like it. That’s why the studio tracks here were recorded in bits and pieces.

“I love the way No Laughing In Heaven and Mutually Assured Destruction sound on the live disc. It’s my favourite version of the former.”

“There’s a cool version we do on here of Living For The City, the Stevie Wonder song. That was Colin Towns’ idea. I would never have thought about doing this, but Colin was right – we did it well.

“I love Bluesy Blue Sea on this album. It’s a phenomenal track. So different to anything we’d done previously. At the time, I’d just moved to the south coast of England, and was entranced by the ocean. This track has a blues base, but was very cosmic, very progressive. It was very futuristic for its time. Very removed from what people expected of us.

“Demon Driver is a song I used to love doing live. It was just great fun to perform onstage. There’s a lot of good music on this album. I hope fans enjoy rediscovering it all.”