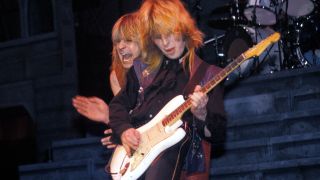 Former Gillan, Ozzy Osbourne and Desperado guitarist Bernie Tormé has been rushed to hospital suffering from virulent pneumonia in both of his lungs.

A message on his official Twitter account says that he’s now in intensive care and is “extremely ill.”

Tormé’s family have now released a statement on his condition through his PR team which reads: “Bernie Torme, the world-renowned guitarist, with stints with Ozzy Osbourne, Gillan and Desperado featuring Dee Snider, was rushed into hospital earlier this week suffering from virulent pneumonia in both lungs.

“He is currently receiving the best possible treatment and is fighting back but remains in intensive care.

“We’ll keep you posted on any change in the situation but for now your thoughts and best wishes are much appreciated.”

Tormé joined Gillan in 1979 and remained with the Deep Purple vocalist until 1981. He then stepped into Ozzy’s band after the death of guitarist Randy Rhoads in 1982, but only remained in the lineup for a handful of live shows.

The guitarist's most recent album was Shadowland, which was released in November last year.

Bernie Tormé is extremely ill in intensive care with virulent double pneumonia. We ask for your prayers.February 13, 2019