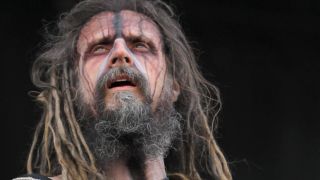 Rob Zombie insists it would be impossible to stage a festival like Download in the US – because the 90s grunge explosion has left a deep wound in the rock scene across the Atlantic.

And he blames the movement that come out of Seattle for opening the door to the mainstream for rap music.

Zombie tells TeamRock Radio: “When the grunge rock thing hit with Nirvana and all that, everybody thought it was cool to be anti-rock star. They sort of anti-rock starred themselves right out the door – because the rap guys came in and said, ‘Fuck it. We’ll be the rock stars if you guys are going to wear flannel shirts and stare at your feet.’

“US rock music has never recovered from that. A whole generation of kids thought, ‘Rock music is boring. Let’s go listen to rap music.’”

That’s one of the reasons he loves coming back to Donington. “Here it’s different,” he states, adding that in the States, “you could never throw a rock festival like this and get this many people. Never – it wouldn’t work.”

Zombie invited younger brother Spider One of Powerman 5000 on stage with him in Germany last weekend, but Spider earlier said it was unlikely to happen at Download.