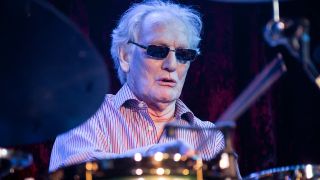 The family of Ginger Baker have issued a statement updating fans on the drummer's condition. Baker was admitted to hospital late last week, with his condition described as "critical."

Now the family has tweeted an update, saying, "Ginger is holding his own & thank you for all your good wishes. He is receiving visits from close family & very special friends."

Baker has suffered ill health in recent years, with the drummer forced to cancel a number of live shows in February 2016 after a fall and being diagnosed with a serious heart condition which required surgery.

He later thanked doctors and was back playing again at the Jack Bruce charity fundraising concert in London in the October of that year.

In an interview with Classic Rock, Baker addressed his health issues, saying: “It’s very, very painful. I have a problem with my lower back, and it gets worse the more I play. It’s painful to drum.

“I have a terrible problem with my right knee, that it sometimes becomes difficult to play. I’ve got a big problem with my wrists. My doctor said it’s arthritis, and there ain’t nothing much you can do about it. It’s just pain.”

Baker formed Cream in 1966 with Bruce and Eric Clapton and went on to form Ginger Baker’s Air Force and play with a number of bands including Hawkwind and record more than a dozen albums, with his latest record Why? arriving in 2014.

UPDATE! Ginger is holding his own & thank you for all your good wishes. He is receiving visits from close family & very special friends.September 29, 2019