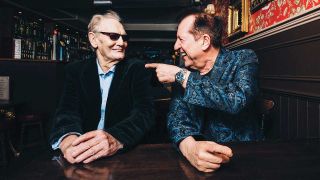 Ginger Baker stands framed in the doorway, as if facing down a hostile saloon. But it’s only bar staff and Classic Rock who await him in this Brighton pub on a slow Friday morning. And any menace quickly evaporates when, seconds later, his left leg gives way, and he’s grabbed before he hits the floor.

Director Jay Bulger’s Beware Of Mr. Baker was the 2012 documentary which revived his terrible legend for a new generation, who watched agog as he ploughed cars off cliffs, assaulted bandmates and the film’s director, and stepped away unrepentant and unscathed.

Interviewing Baker that year at his home outside Canterbury, I still found plenty to beware of. Questions were met with a barked “What?”, and had to be attempted as if under fire, braced in the gale of negativity Ginger generated. Returning there for Classic Rock in 2014, though, I realised that two reasons he kept hollering at me were because he was deaf, and in pain.

Another is that he relishes being rude. But he could also be highly amusing, as when the former Cream drummer derided rock drummers generally and John Bonham in particular, and pursued ancient vendettas against Jack Bruce and Paul McCartney.

His own part in the feuds and calamities which have filled his days – such as the way he lost two fortunes in identical, polo-horse-buying fashion – went wholly unrecognised. Ginger has spent his life repeatedly crashing in the same car – sometimes literally. But Bulger began filming in 2009, when Ginger was 69. Even then, he had a degenerative spine condition and emphysema, and inhaled morphine for the pain.

Ginger at 79 is much reduced. He’s here today to discuss a Drum Legends summit which took place in April at Brighton Dome, with him playing Cream songs alongside the Spencer Davis Group’s Pete York and the project’s instigator, former Scorpions drummer Herman Rarebell.

Baker’s 4am start has certainly taken it out of him, and after 15 minutes asks to call a halt to proceedings. His stone-faced rudeness is undimmed. But what shocks me is that he doesn’t shout. Instead his voice is a whispered husk. Rarebell gamely shoulders the conversation, as we compare and contrast the two men’s drumming careers.

Herman, when you were growing up, was it Ginger’s generation of British blues-boom musicians that really fed you?

HR: Absolutely. Look at it like this. In those days – and we’re talking about 1969 – when you wanted to learn something from an album, you had to lift the stylus and repeat it. I must have listened to [Baker’s drum solo with Cream] Toad five hundred times – “How did he do this?”

Growing up in the ruins still around after the war, what did that British music give you when it arrived in West Germany?

HR: It was a shock. It was the biggest influence on German music ever. At that time you had Cream, Led Zeppelin and Jimi Hendrix. I remember watching Hendrix doing Purple Haze on TV. I couldn’t believe it. And then came Cream’s I Feel Free on Beat Club, where all the British bands came to perform on TV.

I said: “I’ve got to go to England. It’s a waste of time here. We had schlager [inspid, Eurovision-style pop ballads] in Germany, really bad. So the only way was to go to England. I came over in 1972. I had no job and no more money, so to survive I worked as a gardener on Hyde Park Corner, with a stick to pick up leaves. I’ll never forget it. I worked in a pub, and I drank more than the customers so they fired me.

Was it difficult to fit in in England?

HR: No. In my heart I always liked the English, with their humour and the way they are. In Germany everything is very strict and boring. I was happy to get out of there. And then I met the band. Michael Schenker was playing in UFO at the time, and it was Michael who said: “I think you should audition for the Scorpions, my brother Rudolf’s band.”

I got the gig, obviously, then played with them for twenty years, and wrote a lot of their biggest hits. But nothing compared to this guy [gesturing to Ginger]. He’s a giant.

Ginger, the year before Herman moved to the UK in the seventies, you moved to Nigeria, and played with [Afrobeat legend] Fela Kuti for six years. It’s your longest association with anyone. Was that an even more important time for you than Cream?

GB: No difference, really. Well it was quite different. You were going far from any sort of place you’d lived before.

You must have learned so much about drumming, for a start?

GB: [Pauses to consider] Well, I did the whole West African thing. It was something that [jazz drummer] Phil Seaman introduced me to in 1960 at the Flamingo in Soho. That’s where that came from. So when I went to Nigeria, everybody knew me. They didn’t know me because of me, they knew me because of my drumming.

Why did you go to Nigeria?

GB: I became very close to Jimi [Hendrix], and he talked to me about going. We were talking about going there, and then I was touring with Fela when [his great drummer] Tony Allen was ill. It was cool and quite an experience, playing all over Nigeria as the oyindo [white] drummer.

Did you learn from Tony Allen, and Tony Allen from you?

HR: Exactly. There’s your answer. This is Ginger Baker, and every drummer has their personality, you know. I don’t think anybody can copy him.

You also spread out musically, Herman, with your first solo album Nip In The Bud [1981]. You were sick and tired of playing four/four with the Scorpions all the time, so you played what you called “heavy funk” instead.

HR: Yeah, I had come from funk. Don’t forget that I grew up with James Brown and all those black guys. This was my youth when I was a kid. There’s ten years difference between me and Ginger, I’m sixty-nine now. I grew up listening to that great British generation of Ginger and Bonham. But in my early youth it was Buddy Rich and Gene Krupa and all these jazz guys. And then I went into rock.

Those jazz roots are a connection between you and Ginger.

HR: Yeah, but I’m not a jazz drummer. You can play great jazz, Ginger, but not me. I’m a rock drummer. But with this Drum Legends thing, the most important thing is that we don’t play against each other, we play with each other, and that the audience is entertained.

GB: The important thing is that we listen – listen to the music you are playing. And you then play to complement the music.

Herman, after you left the Scorpions did you feel a certain freedom?

HR: Absolutely. I came here to Brighton, actually, to retire in 2008. Then I met Michael Schenker. The first thing he said was: “What are you doing here?” We lived three hundred yards from each other for two years and we didn’t know.

I said: “I want to retire.” He said: “No, let’s do another tour.” It became three tours, till 2016 [in Michael Schenker’s Temple Of Rock], and then I finally wanted to retire. And now I’m doing Drum Legends. As you can see, nobody is going to let us retire.

On that thought, Ginger, you had to stop drumming in 2016 after you had open-heart surgery, and your arthritis means it’s painful for you. Physically, would you rather not be going out to work like this, if you could manage financially?

GB: It’s very, very painful. I have a problem with my lower back, and it gets worse the more I play. It’s painful to drum. I have a terrible problem with my right knee, that it sometimes becomes difficult to play. I’ve got a big problem with my wrists. My doctor said it’s arthritis, and there ain’t nothing much you can do about it. It’s just pain.

So would you rather not be drumming now, if you could avoid it, just to not have that pain?

GB: Hard to say, really. But if I’m doing a gig and I’m getting paid for it, then I’m going to do the best I can.

HR: [Trying to lighten the mood] You know what we decided? To take the pain away, we’re going to take all those drugs we took in the seventies, and we’re going to play and look like twenty. But look, we’re all going to get older. Nobody’s going to stay on this planet. We all have to die one day. So we should take it as it is. If you have a pain now, wait till it’s over. When you get older it takes a little bit longer, that’s the only difference. The same when you have a hangover. I take three days to recover; it used to be three hours and I could drink all night.

GB: I haven’t had a drink for years.

HR: Why did you stop?

GB: Didn’t really enjoy it. I like to smoke marijuana.

HR: Oh, me too. Much more than drinking. I don’t have a headache the next day, and I can play. We’re not making an advertisement for this, but it’s better than alcohol.

Ginger is visibly fading fast, and we call a halt to the conversation. He sinks into a seat while he waits to go home. “Tiring… so tiring,” he moans to his young wife, who stands above him and puts her hand on his shoulder as he leans into her as if into a mother. His belligerent indifference to how he treats everyone else suddenly seems thinning armour for a broken man.

Sympathy is something he has almost never offered or asked for. But, no longer fearsome, he is a poignant sight. “Time” is what he has always been proudest of as a drummer. And now time, as with us all, has caught up with him.