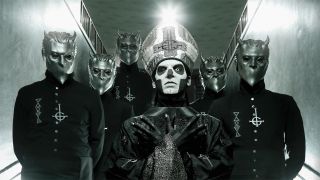 We’ll be honest: when we invited you lot to pitch questions at Ghost ahead of their imminent UK tour, we knew we were potentially letting our favourite spooks in for a world of pain. But, true to form, you did us proud, throwing us questions on everything from album themes to future Papas to, erm, lingerie. Alright, we never said it was all plain sailing. Answering in hushed tones but with good humour over a crackling phoneline, here’s what A Nameless Ghoul had to say when he was forced to face the wrath of the Hammer Army…

Can you hear the rumble that’s calling?

“Right now I’m pretty deaf [unfortunately our Nameless Ghoul is feeling a bit off-colour today], so no! Not right now. But usually I’m able to tap into some noise. I have tinnitus, so I usually surround myself with some sort of background noise, otherwise I’ll hear that ringing in my ear all the time. So I always sleep with some kind of sonic source – but the rumble is usually just a ‘beeeeeep’!”

I read that the next album will be more medieval-themed. Will your masks and outfits reflect that also?

“Yes! Where I think we took the theatricality a few steps forward on this album cycle, hopefully we’re gonna take it five more steps on the next one.”

What kind of style should we expect from our new Papa, in contrast to other Ghost leaders we’ve seen?

“The next album will be set in a much darker and God-fearing point of time. Where Meliora was in a futuristic setting – the Brave New World has very little fear of God – this new record will be set in a point of time where there’s an immense fear of deities. So there will definitely be a Papa around that has very little humour. That alone won’t make a show – there’ll be a surprise for everyone!”

What can we expect to hear in the next Ghost record?

“It will build on Meliora, production-value wise. There are a few things I’m really keen on exploring further; one difference is that it might be more of a sonically conceptual record. As opposed to 10 different songs, it might be like one song that starts in the beginning and goes through to the end, seamlessly. Even though it’s gonna be an A and B side – because I always think in vinyl, so there will be two acts – and even though there will be eight or so single tracks, when you listen through them it’s supposed to sit together. Like [Pink Floyd’s 1975 album] Wish You Were Here. Even though lyrically it won’t be a story, there will be several stories that loosely sit together in front of a backdrop of a certain theme and a certain environment. I can’t really go into depth about it because it’s conceptual right now – we’re still writing it. But you’ll hear it… eventually!”

Why does Papa Emeritus get replaced every 18 months? Soon you will be running out of Papas…

“That is correct! But I’m sure we’ll be able to find a new one. Kinda like the Pope, or the CEO of a company, they’re more or less the same every time. You can always find an asshole!”

Is Papa meant to be a ladies’ man, or did that just randomly pick up over the last tour? If so, does he love the attention he gets from all of the women and men who basically drool over him?

When will Papa IV be revealed?

“I can’t really say! There’s a slight twist to this, so Papa IV might take some time, let’s leave it at that.”

Do you like Surströmming [the Swedish delicacy of herring that’s been put in just enough salt to stop it from rotting]?

“I do not! It’s like if you put a corpse in a can for a long time, and then when you opened the can, the corpse farted.”

What has been your best memory, from forming the band to the present day?

“There have been so many points in time that felt like milestones – obviously The Grammys were fun, and meeting such-and-such was fun, there are so many anecdotes! But one point in time where it felt like the band was really going somewhere was when we played our second show, at the Camden Underworld [in 2010]. The response from the crowd was overwhelming. Since we hadn’t really played live, we weren’t sure how many people would be into our music. At that point, London was the epicentre of where our music had spread. The record [Opus Eponymous] had been out for a week, and that was a moment in time where it felt like this was definitely going somewhere.”

What do the band do with all of the fan art and lingerie they receive?

“Most of the fan art, we keep. Sometimes it gets damaged – not often, but it happens because some people throw it up onstage and in the confusion of loading out, it might be something that gets lost. And sometimes people bring a lot of very delicate things, and it’s a bus, or a truck, and some of this stuff is made of papier-mâché. Underwear – well, they end up in various trophy stage boxes where they’re neatly on display!”

What’s the craziest thing you’ve seen someone from the audience do while you were performing?

“What’s usually on the menu – in-between people just doing what most people do at concerts – is everything from fighting to people copulating! You never really see the close-up action, but sometimes you see two people in the crowd, through your mask, moving in a certain way. And it’s like, ‘Eeeew!’”

Why is Sister Imperator so nasty to the Ghouls? What’s her deal?

“Ha ha, I don’t know – maybe because sometimes we have to be better. If someone isn’t good enough, they’re getting their thumbs smacked!”

When will Sister Imperator make her recording debut?

“That’s a good question. I feel like she’s in all of us already, so perhaps it isn’t necessary to take it any further than that.”

Are you worried that some meddling kids and their dog will unmask you?

Does Ghost’s image go hand-in-hand with your personal convictions and does someone from Ghost profess any religion?

“If we just talk about the Christian Bible – that came about because the Romans needed something to solve their Christian problem, to keep them in line. So someone wrote it 300 years after Jesus died. When Jesus was alive, his ideas were just good ways to treat people. And look at what happened to him! He had some good ideas, but was he the son of God? I can’t believe that. I’d like to be proven wrong. I’ve always been fascinated by the cultural devil, by that imagery. But I don’t believe in it in a literal sense.”

How does anonymity affect the creative process? Do you feel you’re more free to write what you want as a band, because no one can level criticism against you on a personal level?

“I don’t feel like we are anonymous. People usually have no problem finding us after we’ve played, ha ha! But whoever you are – whether you’re Bruce Springsteen or Brian Molko from Placebo – you create a persona. And people expect you to be that person all the time. Whatever you write, you’re putting yourself into your music, so I don’t think the masks separate us from the art that we create in that way.”

How long will Ghost keep up the charade of hiding behind masks, and is there any truth in the rumour Gene Simmons of Kiss is your collective father?

“We aren’t hiding! The masks are part of Ghost, so they will always be there. For example, I might do something musically that isn’t Ghost, and I wouldn’t need to wear a mask. But it isn’t about hiding – it’s about performing. As for Gene Simmons – there’s not a lot of truth in that rumour…”

How does it feel to have Square Hammer as a WWE anthem? [The track was used as an official song for a recent NXT event]

“I used to be a wrestling fan when I was younger, so it’s surreal. I’ll be on the road and people will be texting me all the time saying they just heard Ghost on the TV!”

Have you had any reactions from the bands you’ve covered?

“Actually, yes! Because we’re signed to Universal in Europe, sometimes Benny or Bjorn from ABBA will come into the office. Someone at the label played them the I’m A Marionette cover, and they loved it! That was a really big deal.”

Who would you most like to see cover a Ghost song?

“Tori Amos! I’m not very interested in hearing other metal bands cover us. Apart from maybe Metallica – that would be good… for my wallet!”

Ghost tour the UK throughout March and April.

"Papa has rotating glands under his cloak": The confessions of a Nameless Ghoul

Ghost: A Day In The Life Of A Nameless Ghoul