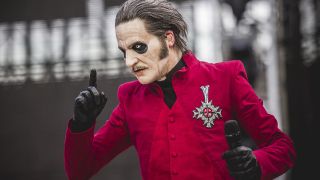 Tobias Forge says fans will have to wait until 2021 before they get to experience “the next chapter of the Ghost story.”

The vocalist reported back in February that work had already begun work on the follow-up to 2018’s Prequelle, telling Billboard that he had “tons of bits and pieces” written.

But in a new interview with OverDrive, Forge has mapped out the band’s plans going forward, and suggests that there will be nothing new from the band for a while.

He says: “I am going into the studio where I will be beginning the work in January. We’re doing another American tour in September and October and then we’re going to come back to Europe – and that is going to take us right up until Christmas.

“So, after new year we are going to have maybe one or two small things at the beginning of the year and then it’ll be all about the new album.”

He adds: “In order to make that record, it’s going to take me about six months and then that’ll take me to the summer, which we’ve already decided we’ll take a break a let the dust settle. Then hopefully by the end of the summer the record will be finished.

“Unfortunately or fortunately, depending on how you see it, the US elections are happening, so bearing that in mind, it’s not the best time to release new material when people’s minds are focused on other things. I just want to make sure that when we release this new album, we have people’s attention.

“I would say by early 2021, you can expect the next chapter of the Ghost story.”

Meanwhile, Ghost were recent guests on Studio Brussel where they performed an acoustic version of Dance Macabre. The Brussels-based radio station have now shared a video of the performance which can be watched below.

Last week, Ghost released the seventh episode in their ongoing video series, with the new clip taking its inspiration from Stanley Kubrick’s classic 1977 horror film The Shining, which was based on the Stephen King novel.

Ghost are currently on the road with Metallica and will embark on The Ultimate Tour Named Death across North America from September in support of their latest album Prequelle.