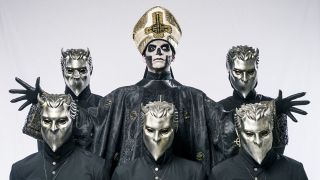 One of Ghost’s Nameless Ghouls has hinted at the serious side of the band’s nature.

They’re already known for attention to detail in their studio and stage work, while pushing their light-hearted take on religion via their costumes and performance.

The Ghoul tells Rolling Stone: “We came up with this mixture where we could combine all our favourite adolescent music styles.

“We found a way of having an extreme metal riff then throwing a pop melody over it.

“After that it was, ‘Oh, shit – maybe we could turn it into a horror-rock band, and we could throw in this very childish sort of fascination for horror films.”

However, there’s a deeper message behind their work, he says. “We’re dabbling with mankind and his or her relationship to God. That’s been the thing through all three records. It will be the thing on the fourth too.”

He adds: “Let’s say we’re 55% about giving a show and 45% about changing the world” and emphasises the band are “not attempting to provide answers to anything – we’re only reflecting.”

But he continues: “If, 100 years from now, there’s a greater acceptance that we can’t go and behead people because of what we think will happen in the afterlife? And we could have anything to do with getting people to accept the fact that we don’t really know anything? I would be really, really happy.

“I don’t think we’ll have that effect, but at least we have the opportunity to say our part.”

He reflects: “In the end we’re here to rock. If people get it, and they’re entertained, I’m happy enough with that. You can’t have it all.”

Ghost’s third album Meliora is released on August 21. They’re featured in the current edition of Classic Rock, on sale now in print, digital and via TeamRock+.