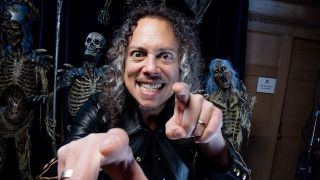 Kirk Hammett and Corey Taylor have hailed the cross-pollination between metal and horror films.

The pair feature in forthcoming documentary The History Of Metal And Horror, directed by Mike Schiff. Metallica guitarist Hammett says heavier music is much better when it’s inspired by “evil and dark stuff.”

He tells Metal Hammer: “A good heavy metal song should be like a good horror movie. Exciting to watch or listen to, with a lot of dynamics.

“You’re not really sure where it’s gonna take you, but once you get there, you’re glad to be there. Heavy metal just doesn’t work when you’re singing about peace and love, or purple flowers.

“It’s much more effective to sing about zombies, the end of the world and the phantom of the opera!”

Speaking of the 1978 film Halloween, Taylor says: “That soundtrack really set the tone for the way a lot of us listen to music. Music is the unsung hero of horror movies.”

He adds: “When metal music gets to that dark place, you really do feel as though you’re seeing a horror movie. You get that same excitement. That’s why we, as fans, love both of them so much.”

Also appearing in the film are Alice Cooper, Megadeth’s Dave Mustaine, Korn’s Jonathan Davis and Cradle Of Filth’s Dani Filth – among a host of other musicians and artists.

The full interview features in the new issue of Metal Hammer – out now in print and via TeamRock+.