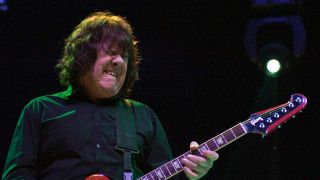 A new live album from the late, great Gary Moore will be released in January. Live From London was recorded at a one-off club show at London’s Islington Academy on December 2, 2009, just 14 month's before the guitarist's death.

The first track from the album has been released, the cover of Albert King's 1966 classic Oh, Pretty Woman that opens the album. Other tracks in the set include 2008's Bad For You Baby, a cover of Donny Hathaway's I Love You More Than You’ll Ever Know, and the classic Parisienne Walkways.

“People ask me, ‘Where do the blues go next?’” Moore once said. “I always answer, ‘They’ve already been everywhere, all round the world a million times.’ The point is where the blues takes you next.

"It’s always been there, and continues to be all these years later, which is what makes it such an important form of music. For me, it’s not so much a case of ‘still got the blues’ any more as that the blues has still got me.”