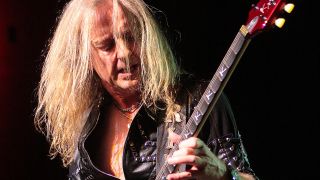 Owens fronted Judas Priest for eight years and sang on the studio albums Jugulator and Demolition, while Binks was behind the kit for Stained Class and Killing Machine and the live record Unleashed In The East.

Downing says: “Forging ahead with KK’s Priest was not only inevitable, but was essential for me to perform and deliver everything that is expected from me and KK’s Priest.

“Due to the massive demand and overwhelming support from fans around the world, I feel this is where I belong, and a set combining the true, classic songs and sound of Priest, together with great, newly forged metal tracks, is what fans can expect when KK’s Priest takes to stages around the world.”

The band are currently working on their debut album which will be released on a date still to be confirmed through Explorer1 Music Group, while tour dates and festival appearances are also being planned.

A statement reads that KK’s Priest will be “taking to stages around the world to celebrate the 50th anniversary of Judas Priest and KK Downing’s career as a founding member.”

Downing quit Judas Priest in 2011 and was replaced in the lineup by their current guitarist Richie Faulkner.

In November last year, Downing, Owens, Binks and Mills played a show in Wolverhampton with Megadeth bassist David Ellefson. The lineup played selection of Judas Priest tracks, followed by a set by Ellefson’s own band.