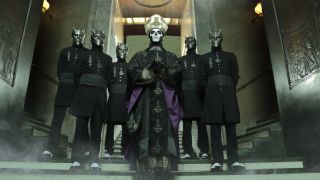 Ghost leader Tobias Forge, aka Papa Emeritus, and his legal team have responded to a lawsuit filed by four former members of the band.

Simon Soderberg, Mauro Rubino, Henrik Palm and Martin Hjertstedt are suing Forge for “missing wages and allowances for several years” and are asking him to disclose the band’s revenue and expenses between 2011 and 2016.

The four also claim that a partnership was in place to distribute proceeds from the band – but this is something that Forge has denied in the new papers which have surfaced online.

The vocalist states that none of the four were original members and “have neither contributed capital investments in the Ghost business nor been responsible to losses in the business.”

Forge’s legal papers also state that the plaintiffs “have only had the task of performing the musical works and the image in Ghost that Tobias Forge has created, produced and decided. For their assignment, the candidates have received fixed fees/salary.

The statement also says that “all musicians formally and present engaged in Ghost are considered musicians for hire” and none are looked upon as “irreplaceable” or “crucial.” It goes on to say that as the band are anonymous, Forge “is free to change the musician at will.”

The original lawsuit brought against Forge claimed that the musicians did not receive any payment in 2012 but were eventually paid sporadic amounts when Forge was put under pressure. The frontman allegedly claimed there was no money available at the time.

Forge now claims that it wasn’t until this year’s European Popestar tour that the band’s touring business turned any profit – and that revenue generated over the years has been used solely to pay fees and wages to musicians and to cover the production costs associated with life on the road.

The statement adds: “Since the costs have always exceeded the income, the wages of musicians have always been guaranteed by Tobias Forge’s other income.”

The papers also claim that until this year, Forge has not received any salary from income related to concerts or the sale of merchandise and has lived off the revenues generated from publishing rights and the royalties from Ghost’s first album Opus Eponymous.

Earlier this week, Forge admitted that the band are essentially a one-man project as up to 15 musicians have been in and out of the lineup since that debut album.