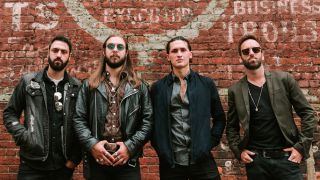 UK blues rock outfit Federal Charm have announced that they’ll split following a final show in their home town of Manchester on September 6.

The band, who have released three albums over the last eight years, say they’ve decided to call it a day to “nurture other creative ventures.”

In a statement, Federal Charm say: “After eight unbelievable years, three albums, and countless tours across the UK and Europe, regrettably we must share the news that we will be performing our last ever show at Manchester's Rebellion September 6.

“We are very proud of what we have achieved. We value the hard work and sacrifice it takes to establish a group in today's climate and with that we wish everyone out there the best of luck.

“We feel it's the right time to part and nurture other creative ventures.”

The statement continues: “We are honoured to have had such a life-changing experience, and above all huge amounts of fun.

"We'd like to thank every single person who has joined us on this incredible journey. Without you it was impossible. What an amazing time we've had. We'll see you in Manchester – it's going to be one hell of a show.”

Tickets for the show are now available.