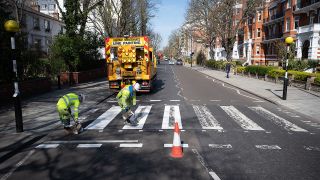 A team of highway maintenance workers in London have had an opportunity to repaint the famous Abbey Road zebra crossing due to the coronavirus lockdown.

New measures to restrict the movements of UK residents came into force earlier this week to try and halt the spread the pandemic – and with the roads and pavements of London much quieter than normal, it’s been the perfect opportunity to give the crossing made famous by the Beatles a much-needed lick of paint.

The iconic image of the Fab Four walking across the road from Abbey Road Studios  featured on the cover of their 1969 album and was taken by Iain Macmillan on August 8.

The crossing was also named a site of national importance in England in 2010, meaning it can only be altered with the approval of local authorities.

The then Minister For Tourism And Heritage John Penrose said at the time: “This London zebra crossing is no castle or cathedral but, thanks to the Beatles and a 10-minute photoshoot one August morning in 1969, it has just as strong a claim as any to be seen as part of our heritage.”

To see the crossing in real time, click on the Abbey Road online webcam.

Last year, an Abbey Road deluxe box set was released to celebrate the album’s 50th anniversary. It went straight in at no.1 on the UK album charts – and broke a record in the process.

Abbey Road spent a total of 17 weeks at the top of the UK charts after its initial release in September 1969 and by reaching the no.1 position once again after 49 years and 252 days, it was officially recognised by the Guinness World Records for the longest time for an album to return to the top spot in the UK.

The Beatles: Abbey Road Deluxe Reissue
Last year marked the 50th anniversary of The Beatles classic 1969 album Abbey Road – and to mark the occasion, it was remixed and remastered for this deluxe box set.View Deal