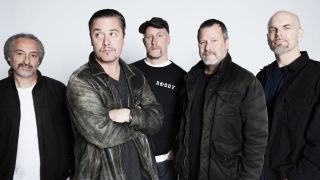 Faith No More have issued a statement to clarify that they’ve played no part in an upcoming pair of re-releases.

The Real Thing from 1989 and Angel Dust from 1992 are to be launched as deluxe editions in August, including B-sides, remixes and live tracks.

But FNM say: “The latest statements seem to imply that these are band-sponsored releases. In fact, they are Warners/Rhino re-issues, who still own the license to them.