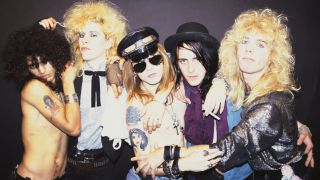 Former Guns N’ Roses manager Vicky Hamilton says she could patch up the relationship between Axl Rose and Slash if given the chance.

She was in charge of the band before they signed to Geffen for the release of Appetite For Destruction in 1987 and was instrumental in helping the group establish themselves in Los Angeles in the mid-80s.

She tells the Daily Mail: “I sometimes think that if I had Axl and Slash in a room together that I could fix it. There’s a difference in how you deal with people when you grow up together with them.

“They know I love them for who they are. I loved them when they were nobody.”

Hamilton’s finished writing a book about her relationship with the band titled Appetite For Dysfunction and is now seeking crowdfunding support to have it published.

She continues: “I decided to write the book because I’m going to be 57 and the memories start to fade. I just want to get it down and document it.

“I absolutely helped the band find their way. Who knows if they’d even have all lived while they were living in a rehearsal hall, having bonfires and doing God knows what. There was no one looking after them which is just scary.”

A film based on the book Reckless Road by Marc Canter which charts the band’s early days is currently being written, while Guns N’ Roses Live Radio Broadcasts, recorded at shows in New York and Chicago in 1988 and 1992, will be issued on April 27.

Slash Featuring Myles Kennedy & The Conspirators will play at this year’s Download festival on the weekend on June 12-14.