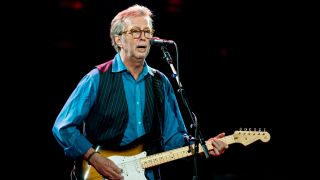 Eric Clapton says he has been living in pain for the last 12 months.

The guitar icon reveals in a new interview with Classic Rock that he has been diagnosed with peripheral neuropathy – a condition that can result in muscle weakness, numbness and tingling in the feet or hands and loss of balance and co-ordination.

Clapton – who released his 23rd solo album I Still Do last month – says: “I’ve had quite a lot of pain over the last year. It started with lower back pain and turned into what they call peripheral neuropathy, which is where you feel like you have electric shocks going down your leg.

“And I’ve had to figure out how to deal with some other things from getting old.”

Clapton, 71, adds that he feels lucky to be alive, considering his history of booze and drug abuse.

He says: “Because I’m in recovery from alcoholism and addiction to substances, I consider it a great thing to be alive at all.

“By rights I should have kicked the bucket a long time ago. For some reason I was plucked from the jaws of hell and given another chance.”

The interview also sees Clapton discuss many aspects of his career with Cream, The Yardbirds, Blind Faith, Derek & The Dominos, John Mayall & The Blues Breakers and his impressive solo works.

The full interview can be read in the upcoming issue of Classic Rock magazine, which hits the streets on June 15. TeamRock+ members can read it now.

The Many Faces Of Eric Clapton: ‘God’ speaks!