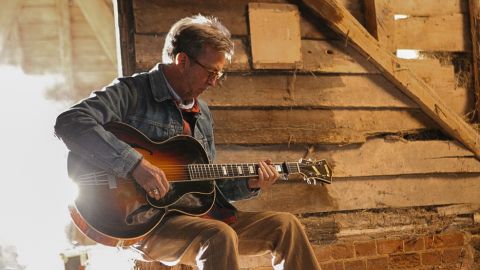 While his live albums have maintained a remarkable degree of consistency and professionalism, Eric Clapton’s studio albums have sometimes wavered in comparison. Essentially, Clapton needs to be challenged in the studio, something that’s easier said than done.

The problem has been solved on I Still Do by Glyn Johns, the man who produced Clapton’s best-selling studio album, Slowhand, back in the 70s, and who is not best known for keeping his opinions to himself. He has given this album a shape and purpose, bringing out the full range of Clapton’s guitar tones. Recording the album on analogue equipment probably helped too.

In terms of content, I Still Do is much the same as his recent albums: a mix of his own songs, some blues and some other covers that have roamed more widely of late. The difference this time is that the production and running order make a clear statement about how Clapton wants to be regarded as he moves into his 70s.

First and foremost he remains a bluesman, kicking off with a gritty version of Leroy Carr’s Alabama Woman Blues with Clapton’s voice sounding relaxed but prominent as the band buzz around him. The two other blues numbers he tackles are more difficult. Robert Johnson’s Stones In My Passway is instrumentally fiendish but Clapton’s scuzzy guitar echoes Johnson’s almost impenetrable sound. Skip James is even harder to interpret and not many have tried (Cream’s I’m So Glad was one of the first) but Clapton’s voice softens the bleak, grinding arrangement.

Secondly, Clapton is still carrying the torch for JJ Cale. Neither the jaunty Can’t Let You Do It nor the steady Somebody’s Knockin’ appear to have been released by Cale, although the latter will be familiar to Clapton fans as the opening song at his Royal Albert Hall shows last year. Almost as distinctive is Clapton’s own Spiral where he manages to express the feeling of being possessed by the music inside him.

Among the covers there’s a heartfelt version of Paul Brady’s I Will Be There, sung with Ed Sheeran. Bob Dylan’s I Dreamed I Saw St Augustine seems a strange choice until you link it with the traditional gospel song that follows, I’ll Be Alright, which suggests that Clapton is delving a little deeper into the pre-war era from which so many of the blues songs that inspired him emerged. The cover art, a portrait by Sir Peter Blake, adds another touch of class.