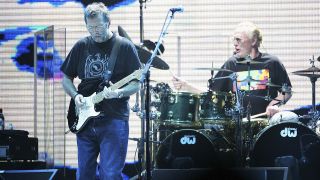 The legendary Cream drummer died in October at the age of 80, with the concert on February 17 at London’s Eventim Apollo Hammersmith raising funds for the health and welfare charity Leonard Cheshire, which Baker was a supporter of.

A statement on Clapton’s website reports that the setlist for the concert “will look to honour Baker’s lifetime in music and will, of course, include Clapton and Baker’s work together in Cream and Blind Faith.”

A full list of artists for Eric Clapton & Friends: A Tribute To Ginger Baker will be revealed in due course.

Tickets will go on sale this coming Friday (November 29) from 10am from the venue box office.

Baker, who suffered ill health in his later years, was admitted to hospital in September with his family saying at the time that he was in a critical condition. He died on October 6.