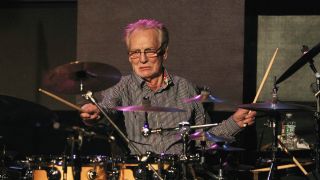 He has major gripes with many of the countries he toured, and subsequently resided in; he despises heavy metal and his supposed role in its birth; and when Classic Rock talks to him, it seems there’s plenty more on his mind. From misconceptions that gave him his ‘wild man’ image to legal wrangles and bankers’ bonuses, few subjects are spared Ginger’s trademark short shrift.

A documentary about you, Beware Mr Baker, has just been released in the US. How did you find having a film-maker follow you around for a month?

It was very, very, very, very tiring. I don’t like interviews at the best of times, so to do one for a whole month, with cameras following me everywhere, was really quite difficult.

Why did you agree to it?

It was a very bad time in my life. They offered me some money to do it. I took the money, so I had to do it. Some of the film is great, some of it is not so great. Some of it I find very annoying.

There are so many misconceptions about me. Like the ‘wild man’ thing. It was blown out of all proportion. Anything that happened, all of a sudden it came back that I was responsible. I’ve never thrown a television out of a hotel window in my life!

I have studied theology quite intently. All religions are just businesses playing off this pie in the sky when you die. I don’t really subscribe to that at all. It goes far beyond the comprehension of man.

Do you get involved in politics?

I came back to this country and found that the vast majority of the population are brainwashed. They obey without question. The economy is in a state, and they’re protecting the top bank officials, with them getting bonuses. They get two million a year in wages, so what do they want bonuses for? If that money went into the country, there wouldn’t be a problem. They are the problem.

You’ve lived all over the world. Have you found those problems wherever you’ve been?

Why did you not enjoy the US or South Africa?

I went to South Africa because I had to go somewhere, because the American government wouldn’t accept me, even though I married an American. I had a visa every two years, and it reached the point where it was very likely going to be refused. I looked at a lot of places, and South Africa seemed quite attractive at the time. Having lived there, it’s a terrible place. People are getting away with crime. There’s a saying over there: ‘Justice delayed is justice denied’. I was in a court case that lasted over three-and-a-half years and totally broke me – even though I won! It was against a bank employee. She ripped me off, and told the papers that we were romantically involved. It was absolutely untrue and they believed her.

Why did you return to the UK?

Because of my step-daughter, for her education. She’s at a very good school and doing very well. Once she has her education, I’ll be going somewhere more pleasant.

Are you happy to still be drumming at 75 years old?

Not really. I like the music – it’s the travelling that is very tiring for me now. I’m not exactly well, and it’s very hard work. But I really enjoy the music, and that’s why I do it.

How has the music industry affected your health?

The music hasn’t at all. It’s one of the miracles that I can still play the drums, despite all of my physical problems. The problem we had was amps. They damaged my hearing forever.

What are you proudest of?

I’ve had loads of high points and loads of low points. Whereas a lot of people would have topped themselves, I kept going. Being from a very poor background, you can handle that. Getting to know people I really admired and getting accepted and respected by them [is a highlight]. Guys like Phil Seaman, Art Blakey, Elvin Jones, Max Roach, all these people became friends of mine, and I was accepted by them on the same plane. That was worth more than all of the money in the world.

Your drumming with Cream is often linked to the birth of heavy metal.

If I had known that, I would have had it aborted. That is a total misconception. Cream was improvisation. We never played the same two nights running.

I don’t really care. I won’t know, because I’ll be gone.

Ginger Baker was born in 1939. So, what else happened in that year? Here are five events worth noting: