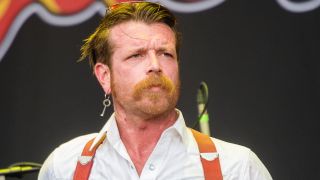 Jesse Hughes wasn’t refused entry to the Bataclan venue in Paris for its reopening a year after the Paris terror attacks, his manager has said.

And Marc Pollack insists no member of the Eagles Of Death Metal even tried to gain entry to the Sting show that marked a return to business at the weekend.

Hughes and co were performing there on November 13, 2015, when 90 people were murdered by extremist gunmen. In the aftermath, the frontman claimed that Bataclan staff had been in league with the terrorists – and despite apologising, later repeated the suggestion.

In response, venue manager Jules Frutos said at the weekend that Hughes had been barred from entry, adding: “They came. I threw them out. There are things you can’t forgive.”

But Pollack tells Billboard: “This day is not about Jesse of Eagles Of Death Metal. In fact, Jesse is in Paris to share in remembering the tragic event with his friends, family and fans.

“This is about recalling the tragic loss of life that happened right in front of his eyes during his show.”

He insists that Hughes “never even tried entering the club” and adds: “This coward Jules Frutos feels the need to soil his own club’s reopening by spreading false tales and tainting a wonderful opportunity that could have been used to spread peace and love.”

BIllboard report that Hughes was seen outside the Bataclan, and that he was in Paris at the city mayor’s invitation to take part in commemoration events including the unveiling of a plaque.

The first show since the terror attacks was performed by Sting, who told the crowd: “We’ve got two important things to do tonight – to remember and honour those who lost their lives, and to celebrate the life and music of this historic venue.”

Hughes has not commented.