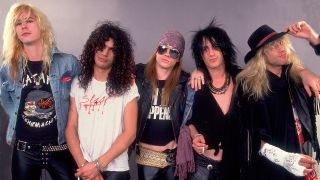 Since Axl Rose, Slash and Duff McKagan got back together in 2016 for the start of Guns N' Roses' Not In This Lifetime tour, fans have been asking why guitarist Izzy Stradlin wasn’t involved.

Speaking with the The Wall Street Journal back in May last year, Izzy said: “My non-participation was simply not being able to reach a happy middle ground through the negotiation process.”

Now, in a new interview in the latest edition of Classic Rock magazine, bassist McKagan has shed more light on the situation from the point of the band.

He says: “I don’t know what the actual truth is. We definitely wanted him to do it, and I think he entertained the thought, but he never came down and rehearsed.

“The third month of rehearsal went by... nothing. I guess he just didn’t want to tour this big and for so long.

“I love that dude, but I gotta say that Richard Fortus is a hell of a player and we couldn’t ask for a better guy.”

Another hot topic of conversation is about a possible new Guns N’ Roses album. Both Richard Fortus and Slash have mentioned it in the past, while McKagan himself reported in February: “Oh, it's real.”

Asked by Classic Rock if there was any update on the record, Duff responds: “You never know with this band. That’s where I’ve landed on this thing. But the stuff’s cookin’. Everybody’s on top of their game at this point, musicianship-wise and songwriting-wise.

“We have this tour under our belts where we played a ton together. We know our strengths. We’re now looking forward to what’s next, for sure, with Guns N’ Roses.

“And after making this solo record, which is kind of mellow, I look forward to getting back to rocking the fuck out. So there’s my answer.”

McKagan will release his solo album Tenderness on May 31 and has launched the songs Chip Away, Don’t Look Behind You and the title track from the record.

The full interview with McKagan can be found in the latest issue of Classic Rock, which is on sale now.