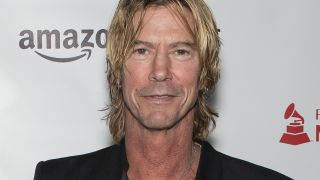 Duff McKagan has praised Axl Rose’s live stint with AC/DC, saying he did an “amazing” job.

The Guns N’ Roses frontman was brought into the fold after vocalist Brian Johnson was forced to bow out of the band in March 2016 or face “total hearing loss.”

Rose subsequently toured with AC/DC on their Rock Or Bust live shows and it was also a move which started a friendship between the two camps.

Speaking with The Church Of What Happens Now, McKagan said: “The way Axl did that was amazing. He was, like, 'If you guys don't mind, I'm going to try out. They need a hand.’

“Bon Scott's his all-time hero. We told him, ‘Dude, you know you don't really have to try out for AC/DC.’ But he was really nervous.

“He went to Atlanta and got the gig. I saw him twice on that tour. I flew to London to see him, and I flew to Cleveland. It was great.

“We got to know Angus Young through that. Angus has come out and played with us a bunch of times. There’s that thing when he was 14 or 15, like, ’Man, one day, if I ever got to be in AC/DC…’ He was singing with a broom, and he finally got to do it. Amazing.”

McKagan is preparing to release his new solo album Tenderness, which will launch on May 31.

He’s joined on the record by Shooter Jennings, John Schreffler, Jamie Douglass and Aubrey Richmond, and they've released the songs Last September, Don’t Look Behind You, Chip Away and the title track.

They’ll also head out on tour across the UK and Europe later this year.

Duff McKagan is interviewed at length in the current issue of Classic Rock, which is available now.