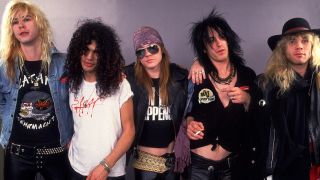 Asking Alexandria supported Guns N’ Roses a few years ago in New Jersey. Opening for them was terrifying, because they’re one of my favourite bands. But how many bands get to say they opened for them? They’re awesome and I listen to them every day. They’re one of the most influential bands of all time.

If, for some reason you haven’t heard many of their songs, then what’s wrong with you? You must must check them out immediately.

SWEET CHILD O’ MINE (Appetite for Destruction, 1987)
Sweet Child O’ Mine is obviously one of Guns N’ Roses’ greatest songs. It might be a little bit overplayed – and by a little bit, I mean a lot – but that’s because it’s probably the first song people will have heard by them. It’s an anthem and has one of the best guitar licks ever written. Sweet Child O’ Mine is one of those songs where you’ll know all the words after just hearing it once and can’t help but sing along.

NIGHTRAIN (Appetite for Destruction, 1987)
Nightrain is one of my all-time favourite songs. We were invited to play it with Steven Adler one time. When we got to the rehearsal space, I was the only one who’d bothered to learn the song. He got pissed off, took my bottle of wine, drank it and stormed out. So we never actually got to play it with him, but it was an experience nonetheless.

MY MICHELLE (Appetite for Destruction, 1987)
This song is fast, upbeat, and the lyrics are easy to sing along to – especially if you’ve had sex with someone called Michelle. It’s the one where Axl likes to bring Sebastian Bach out on stage to sing. He’s another one who I’ve got a funny story about, but that’s for another time. He’s a crazy man!

NOVEMBER RAIN (Use Your Illusion I, 1991)
November Rain is a classic, timeless song. It’s not particularly heavy, but it’s epic. It’s like the first epic song that you’ll listen to when you’re getting into rock music. It completely changed the game, for me, anyway. To go from a hard rocking song like Nightrain to a ballad like this is so inspiring. It’s why they’re one of the greatest rock ‘n’ roll bands of all-time, I think. Slash is a fucking genius as well, and all his guitar parts are out of this world – but this song in particular is breathtaking. He pushed himself to the limits in this song. And Axl’s piano playing is astounding, too.

This is another great song from Use Your Illusion I. Obviously, it’s a cover of Wings’ Bond theme tune, but they did a better job, I think. They improved the song. It’s way ballsier, and I love it.

IT’S SO EASY (Appetite for Destruction, 1987)
I like this song because it reminds me of myself. I listen to the lyrics and I’m like, ‘Oh right, he’s a dickhead. And I’m a dickhead’. I can relate to this!

MR BROWNSTONE (Appetite for Destruction, 1987)
Obviously, I would’ve loved to have been in LA in the ‘80s, partaking in naughty things and having a good time, just like they describe in this song. Your average person wouldn’t think about this song when they think about Guns N’ Roses – but it’s definitely one of my absolute favourites by them. It’s a classic.

Appetite is probably my favourite rock ‘n’ roll album ever. It’s definitely the best debut album that I’ve ever heard. Every song on there is classic. Really, I should’ve just picked the whole record from start to end for this list. There’s not one song on there that you’d skip. But there are 12 songs, so I’d have to leave two out anyway. Paradise City absolutely has to be in there though. That’s obvious, isn’t it?

PATIENCE (G N’ R Lies, 1988)
This song has a different vibe to the rest of them. The mood is completely different, and again, it shows how diverse they were as a band. As soon as the song starts you know exactly what song it is, who it’s by and who’s singing it. It’s a classic rock song. They all are. I’m in two minds about a potential reunion, though. I feel like it’s been so long now. It would be so shit if they came back and it wasn’t what everyone expected. It would take away from everything that they still have as a band. Their legacy is so significant, so the idea of it makes me nervous. I think they should leave it be, and we should just enjoy the songs.