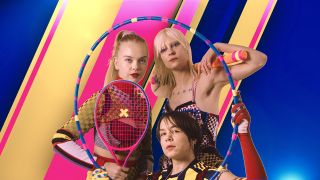 London-based trio Dream Wife have released a video for their new single Sports!.

It’s the first track from Rakel Mjöll, Alice Go and Bella Podpadec’s upcoming album So When You Gonna…, which is set to arrive on July 3 through Lucky Number.

Dream Wife say: “Sports! sits on multiple levels – of satire and celebration, of nonsense and common sense, of the body and the mind, of IRL and digital.

“The video simultaneously plays with and celebrates 'sports' through multiple levels of reality and non-reality – exploring the nonsense of sports, toying with the seriousness of competition and the rigidity of rules while also asserting how important it is to be in your body, the joy of being in a team, the purpose in doing something for the sake of doing it, the endorphins and the sweat.”

They add: “Playing sports is great if that's for you, but there are so many other ways to be physical, to be with your body. For us, more often than not, it’s the rock show. Rock’n’roll is an extreme sport and we're a team.”

Speaking this week with BBC Radio 1's Annie Mac, Dream Wife said they had recorded the album with a full team of women – producer and mixer Marta Salogni, engineer Grace Banks and mastering engineer Heba Kadry – to address the current gender imbalance in the music industry.

"Female producers are less than 5% in the industry," they said. "It was a real eye-opener working with this team, and they're incredible."

Dream Wife have also revealed a new podcast series, also titled So When You Gonna….Each episode takes the form of a one-on-one interview featuring a member of the creative industries chatting about how they’ve honed their craft, ie So When You Gonna… Get Into Production.

Go says: “It’s an informative thing to feed back to our fans to be able to see about getting into certain industries. It’s about fostering communities. And it’s a skill share.

“It was amazing to work with this community of womxn on this album who are supporting each other in an industry that is so male-dominated. It was a way of us practicing what we preach.

“It felt like an honour to be able to deliver this baby with these three amazing midwives."

Podpadec adds: “What would you call the opposite of gate-keeping? Facilitator? Enabler? It’s all about opening the gates.”

Dream Wife, who released their self-titled debut album in 2018, are currently preparing to head out on tour across the UK and Europe.

"The album was recorded with a full team of women. Female producers are less than 5% in the industry. It was a real eye-opener working with this team, and they're incredible"Hear the full interview as @AnnieMac welcomed the return of @DreamWifeMusic👂https://t.co/DcHDrtypmV pic.twitter.com/skCukFPrx1March 10, 2020