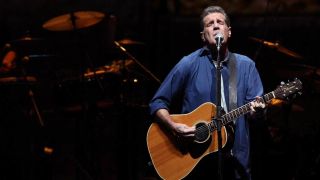 Don Henley has led the tributes to his Eagles bandmate Glenn Frey, who died this week at the age of 67.

Frey had been battling intestinal issues which required surgery late last year and his family and bandmates confirmed that he died in New York yesterday, January 18.

His family – wife Cindy and children Taylor, Deacon and Otis – announced his passing in a joint statement with the Eagles.

Musicians including Slipknot’s Corey Taylor, Ryan Adams, Huey Lewis, Scott Ian of Anthrax and Judas Priest’s Richie Faulkner have expressed their grief at the news of his death.

And Henley has offered his own, personal, tribute to a man he describes as “funny, bullheaded, mercurial, generous, deeply talented and driven.”

Henley adds: “He was like a brother to me; we were family, and like most families, there was some dysfunction. But, the bond we forged 45 years ago was never broken, even during the 14 years that the Eagles were dissolved.

“We were two young men who made the pilgrimage to Los Angeles with the same dream – to make our mark in the music industry. And with perseverance, a deep love of music, our alliance with other great musicians and our manager, Irving Azoff, we built something that has lasted longer than anyone could have dreamed.

“But, Glenn was the one who started it all. He was the spark plug, the man with the plan. He had an encyclopaedic knowledge of popular music and a work ethic that wouldn’t quit.”

He continues: “He loved his wife and kids more than anything. We are all in a state of shock, disbelief and profound sorrow. We brought our two-year History Of The Eagles Tour to a triumphant close at the end of July and now he is gone.

“I’m not sure I believe in fate, but I know that crossing paths with Glenn Lewis Frey in 1970 changed my life forever, and it eventually had an impact on the lives of millions of other people all over the planet. It will be very strange going forward in a world without him in it. But, I will be grateful, every day, that he was in my life.”

Singer and guitarist Frey founded the band with Henley, Bernie Leadon and Randy Meisner in 1971. Their 1976 album Hotel California went on to become one of the most successful of all time, selling 32 million copies worldwide.

The band split in 1980 before reforming 14 years later and issuing live comeback album Hell Freezes Over. The Eagles are cited as a major influence by countless musicians. During the band’s split, Frey released a string of solo albums and hit singles, which included The Heat Is On – the main theme from 1984 smash hit film Beverly Hills Cop.

His most recent solo album was 2012’s After Hours.