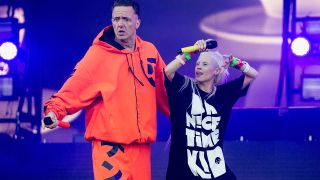 Chicago’s Riot Fest have become the latest festival to drop Die Antwoord from their bill.

They’ve been replaced by Wu-Tang Clan for next month’s event and follows a similar move by Louder Than Life, who have also removed the South African duo from their lineup.

The news comes after a video surfaced online showing an altercation between Die Antwoord’s Ninja and Hercules and Love Affair’s Andy Butler at the Future Music Festival in Australia back in 2012.

The video shows Ninja appearing to spit in Butler's face, while Die Antwoord’s Yolandi appears to direct homophobic slurs towards Butler as he tries to run away.

Ninja has issued a statement denying it was a hate crime and claims the incident was sparked after Butler followed Yolandi into the women's toilets at the festival and refused to let her out.

He also insists that Ben Crossman, their former cameraman who filmed the incident, had edited the clip to make it seem like it was a hate incident.

Ninja says: “This was just a fight with someone who fucked with us. Not a hate crime. This fight had nothing to with the fact that this guy was gay. We don’t care about people’s sexual preference. Our DJ and best friend DJ HITEK is gay, and a lot of people in our crew are gay.

“But if a person – no matter what their sexual preference it – keeps harassing us over and over, then physically harasses Yolandi, there will obviously be repercussions.

“Ben Crossman has been on a rampage to make us look bad in the media because we fired him years ago, for being mentally unstable, and malicious towards our family."

Crossman has issued his own statement to EDM denying the video had been edited and has apologised to Butler for his role in the attack, saying he had been tricked by Yolandi, who he claims had fabricated the story about being followed into the toilet.

"My apologies go out to Andrew Butler," he says. "I was utilised as a flying monkey by Ninja and Yolandi in this instance and for that I am not proud."

On Reddit, there are also reports that Die Antwoord have now been pulled from the Life Is Beautiful festival, too – although there has been no official confirmation from organisers.