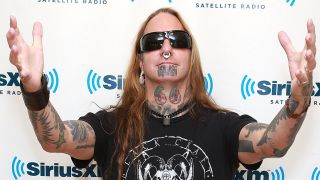 DevilDriver will return with seventh album Trust No One on May 13, they’ve announced.

It follows 2013’s Winter Kills and it’s their first with guitarist Neal Tiemann and drummer Austin D’Amond, after the departures of Jeff Kendrick and John Boecklin last year.

The band had been on hiatus while mainman Dez Fafara worked with Coal Chamber on their reunion release, Rivals.

Fafara says: “Trust No One is filled with killer riffs, groove after groove and massive hooks.

“It’s rightly named – there will be no explanation needed regarding what the title means. The lyrics are volatile and straight to the point. See you next year on tour.”

Earlier this year he reported: “Over 12 years we put out six records and we never really took time off. It became clear to me, ‘I need at least nine months off just to hang out with my family,’ I don’t want DevilDriver sitting around too long – but we definitely needed to take a break.”

Further details will be announced in due course.