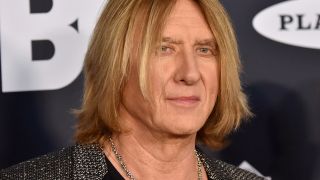 The rising Michigan stars have had their fair share of criticism due to their sound, with Steven Wilson lashing out at them last month, calling their music “absolutely abysmal.”

But Elliott says there’s nothing wrong with any band wearing their influences on their sleeves.

Asked by ET Canada what music he’s been listening to, Elliott replies: “Not much, I’ll be honest. But the two obvious ones is Greta Van Fleet, which is the big thing at the moment. Or Greta Van Zeppelin as everyone’s calling them. Yeah, they sound like Led Zeppelin. So what?

“When we started out, we sounded like Queen and AC/DC, so, everybody's got to start somewhere. It's OK to wear your influences on your sleeve these days, I believe.”

The vocalist goes on to praise UK outfit The Struts, and says: “I think the singer Luke Spiller is an absolute star. He deserves to be on the stadium stages. Hopefully one day he will be.”

Halestorm vocalist and guitarist Lzzy Hale told Classic Rock that her band were “rooting for them,” adding “We’ve been on the rock scene for many years and this is a rock band who are sitting at the cool table right now, and I truly think it’s going to do an amazing thing for all of us in rock’n’roll.”