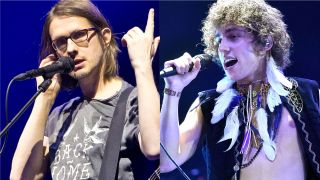 The musician was talking to the My Rock podcast when he said that while it’s been “a struggle” for him over the last 25 years to build his audience, others have achieved success almost overnight thanks to mainstream media getting behind them.

Pointing specifically at the Michigan outfit, who recently won a Grammy for their EP From The Fires, Wilson says: “You know that terrible band Greta Van Fleet? I think they're absolutely abysmal. I think they're terrible. I think it's a joke.

“But they're an example of a band, because they're pretty young boys, they look like a boy band, they play this really piss-poor, third-rate impersonation of Led Zeppelin.

“But they're pretty and they've had all the help of the media, the commercial machine, behind them and they've been able to reach a massive audience almost overnight by playing third-rate music.

“I don't believe for one minute that anyone will even remember who they are in 10 years."

While Greta Van Fleet have come under fire from some quarters for their sound, the band themselves have shrugged the comments off and told Classic Rock last month: "Maybe we’re introducing a new generation of rock’n’roll.”