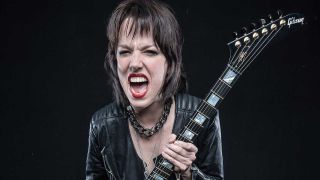 “After the first time I got to share the stage with Tom Keifer from Cinderella, we started hanging out, and I went to his house where I met his family. Everything was normal and nice. They were wonderful. Then I left and I was like, ‘Wait a minute, I was just hanging out with my idol!’ Does that make me cool? Or is it just me fangirling? That was the first point where I could say, ‘I’ve come a long way.’ When you’re hanging out with the guy who’s literally responsible for you picking up a guitar, that’s a very special moment.”

Have you ever embarrassed yourself in front of one of your heroes?

“Yes, and this is another Tom Keifer story. He was sweet about it, and so was his wife, but I told his wife that when I was a teenager I wanted to marry him. I heard the words come out of my mouth before thinking, ‘You are probably the one person I shouldn’t be telling this’, so I tried to back-pedal. That was a pretty mortifying, facepalm moment.”

Have you ever pulled out the ‘Don’t you know who I am’ line?

“I haven’t, but a friend did! We were trying to get into a strip club. The girl I was with was a little drunk, and we asked how much the cover charge was. It was expensive, so I said to my friend, ‘Let’s just go to a bar.’ But she was like, ‘No, we’re getting in.’ She said to the guy on the door, ‘Don’t you know who this is? This is Lzzy Hale from Halestorm!’ and started listing all our singles. I was just like, ‘Dude, calm down, it’s OK…’ I was embarrassed, actually. When she listed off I Get Off, the bouncer was like, ‘Oh, you’re the I Get Off Girl. We play your song in here all the time. Come on in!’ I ended up getting a free lapdance out of it, but I swear it wasn’t me. It was all my friend. It definitely worked, though!”

What’s the weirdest gift a fan has ever given you?

“I’ve been given tampons, boxer shorts, all kinds of stuff. A couple presented me with a box they’d painted gold. Inside was a gold pacifier – like a dummy – for babies. It had fangs on it so if you sucked on it, it looked like you had fangs. I felt bad because they asked me, ‘Can you put it in your mouth for the photo?’ And I was like, ‘I have no idea where that’s been. I’m not going to stick it in my mouth, I’m sorry.’ I still have it. I kept it because I knew I was never going to get a gift like that from anybody else ever again. I’m not sure what they wanted to get out of that scenario. Maybe it was a fetish…”

What’s the most ridiculous outfit you’ve ever worn on stage?

“Oh, there have been so many, and the wonderful thing about the internet is it all comes back to haunt me. There was a tour where I feel like I was wearing everything in my suitcase. I don’t know why. It was a very confusing time. There’s a photo of me wearing a white leather vest that I’d made, two pairs of leggings (one with holes), a tutu, chokers, goggles… What was I doing? I don’t think I have that outfit anymore. I think I burned it.”

Have you ever had a fight with your brother on stage?

“Oh yes. I’ve definitely made fun of him on stage, and sometimes it goes over well but other times it doesn’t and I get drumsticks in the back of the head. There’ll always be certain times, probably about once a tour, where he gets really annoyed with me and hates my guts. I always tell him, ‘Arejay, it’s my God-given right as your older sister to give you hell. It doesn’t mean I don’t love you.’ It depends on his mood whether he can appreciate it or not.”

Who was potty-trained first, you or Arejay?

“Obviously it was me. My mother said it best – and if my brother reads this article he’ll probably be mad at me for this now, too – when she said once, ‘Lzzy, we had two kids because of you. But we only had two kids because of him.’ But it’s very true. I was a very good child, and then Arejay happened. And he’s still happening. But I wouldn’t have him any other way.”

“I haven’t actually, which is weird. I’m surprised that I don’t have something on my record, but I guess I’m just sneaky like that. So far, I’ve got a clean slate.”

If you could be any animal, what would it be?

“You know what’s funny – because we’re kind of cheesy – is we were actually talking about this as a band a couple of days ago. There was beer involved though, so don’t judge too hard. But I think I’d be a Mantis shrimp. They’re freaking awesome – really colourful, very deadly, but unassumingly so. They’re really interesting creatures, and I see a bit of myself in them.”