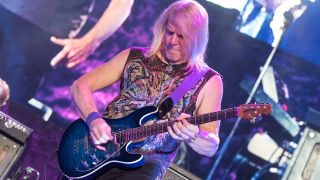 Deep Purple guitarist Steve Morse has responded to Ritchie Blackmore’s comments that he’d welcome a return to the band for a one-off performance.

Blackmore left Purple for the final time in 1993 and in a recent interview said: “I think if they were interested and our dates didn’t clash, I would perform a single show – for old times.”

Asked how he feels about those comments, Morse, who permanently replaced Blackmore in the Deep Purple lineup in 1994, tells Billboard: “Well, he’s one of the founding members. Fans would love it. It would be nice, I think, to see closure with everybody involved and the bad feelings put aside.

“I think they’d all get a kick out of it if they could get past the psychological barriers. I am a fan of music, I’m a musician. I am not a politician.

“And at the Rock And Roll Hall Of Fame induction, I thought Ritchie Blackmore was going to show up. He could’ve played three songs, but I ended up doing them because he didn’t. That was up in the air.”

Morse says for any sort of reunion to take place “the ice has to be broken” after years of negativity, but adds: “I think that once that’s done, they’d all have a great time. But I don’t know how to go about doing that.

“Anyway, as far as I am concerned, all members, past and present and future of Deep Purple, are welcome.”

In a 2014 interview with Rolling Stone, Deep Purple frontman Ian Gillan said it would be “unconscionable” to think of bringing Blackmore back into the fold, while drummer Ian Paice reported there would be “no point” considering any sort of reunion.

Deep Purple released their 20th studio album InFinite in April this year and are about to embark on their The Long Goodbye tour, which gets under way this coming weekend in Las Vegas.

Deep Purple: 50 years in, where will the adventure take them next?