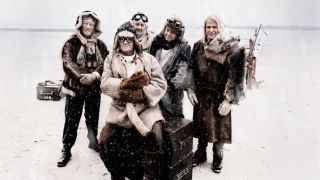 Deep Purple drummer Ian Paice says the band still feel like “a bunch of kids” when they’re making music together.

They’re gearing up for the launch of their 20th studio album InFinite on April 7 which will be followed by The Long Goodbye tour.

And although it might appear that Deep Purple are slowing down, Paice says his love of making music remains as strong as ever.

He exclusively tells the new issue of Classic Rock: “It’s hard to accept that this thing you helped to create and grew up with will be no more. When we can no longer cut the mustard on stage, then we’ll think about hanging the boots up.

“Go and listen to 1972 live album Made In Japan and glory in the fact that there were a bunch of kids who could back then capture all that craziness and still have a measure of control.

“Now listen to what we’re doing all these years later, and inside we’re still a bunch of kids. You don’t have to lose your love for making music.”

While the name of Deep Purple’s tour might suggest the end of the road for the band, bassist Roger Glover believes they could carry on for up to four more years – and InFinite may not be their final album

He says: “The record company came up with that title anyway. They’re hedging their bets. The idea of announcing a final show like Sabbath has just done – none of us wanted that.

“So we thought, ‘Sod it, let’s just keep going.’ But then no one knows what’s around the corner. It seems the fashion these days is to drop dead – which is kind of frightening when people younger than you are suddenly gone.”

Deep Purple are the cover stars of the brand new issue of Classic Rock magazine which is on sale now and features interviews with all five members.

Other artists in this month’s issue include Jethro Tull, Mastodon, Thunder, Jimi Hendrix, The Magpie Salute and a look back at the life and music of the late John Wetton.

Deep Purple: 50 years in, where will the adventure take them next?