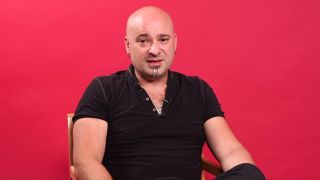 Disturbed frontman David Draiman has ruled out the chance of making another Device album.

He says it working with the side-project was a rewarding experience – but that it’s time to focus fully on his reunited main band.

Draiman tells Loudwire: “As they say, ‘never say never,’ but I really don’t have any intentions of it. I’m going to make sure I pay proper attention to the leviathan from here on out.”

He adds: “All of us had really amazing experiences working with our respective projects – myself with Device, Dan Donegan and Mike Wengren with Fight Or Flight, and John Moyer with Adrenaline Mob, Geoff Tate and everybody else.

“You grow, working with other musicians. You learn from them. The Device record alone was so rewarding. Doing work with Dave Mustaine, producing the Trivium record – all that was a learning process.”

Draiman believes the experiences have added an extra element to Disturbed, who he says already had “the greatest amount of creative chemistry on this planet.”

The vocalist continues: “You have all this new ammunition from a knowledge standpoint, and you get to unleash it with the guys who harness it more effectively for you than anyone else.

“There’s no substitute. There’s something about hat we have as Disturbed that I can’t find elsewhere. So why should I look?”

The band recently announced a US tour.