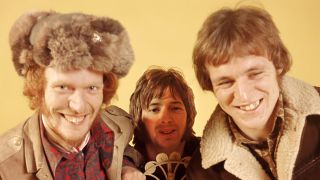 Ginger Baker and Eric Clapton of Cream have led tributes to bassist and vocalist Jack Bruce, who died yesterday at the age of 71.

The news was confirmed by his family and publicist following days of online rumours started by a hoax. He’d been suffering from liver disease.

Despite their difficult and often violent relationship, drummer Baker said last night: “A very sad day. Goodbye my friend.” Clapton added: “He was a great musician and composer, and a tremendous inspiration to me.”

Among the others paying their respects were members of Black Sabbath, Megadeth, Rush, the Red Hot Chili Peppers, the Beatles, Queen, Asia and many others.

TeamRock Radio will play Cream’s 1968 album Wheels Of Fire in full at 4pm GMT today as a memorial.

Tony Iommi: Very sad to hear of the passing of Jack Bruce, a major influence in music and an amazing bass player and singer. He was a hero to so many other players.

**Geddy Lee: **“One of the greatest rock bassists to ever live and a true and profound inspiration to countless musicians. He was one of my first bass heroes and was a major influence on my playing and my music. My heartfelt condolences to his family and fans.”

Glenn Hughes: RIP my beautiful friend – thanks for your amazing art, and being such an inspiration when I started playing bass.

Flea: Oh man. Jack Bruce. Too much. Wow. Holy holy. I love that guy. One of a kind greatness. End of an era.

Billy Sheehan: By far one of my biggest influences and important heroes of my life has passed away. God bless you, Jack.

Ringo Starr: We lost Jack Bruce today – an incredible musician, writer and a good friend. Peace and love to all his family.

**Brian May: **So sad to hear this great pioneering rock musician is gone. Inspiring to us all. I’ll be listening to Badge tonight.

Pete Way: Another sad loss to the the rock world. RIP Jack.

Kim Simmonds: I grew up listening and watching Jack. I listened to him in Blues Incorporated and saw him with Graham Bond. Later, I was the opening act for Cream’s first London gig. Then I saw him live during his solo career. I never knew him or spoke to him, but he has been a part of my psyche since day one of my career. As with all of us music lovers, I think something of me has departed along with his passing.

Steve Lukather: I am honoured to have known him. The world lost another legend.

David Ellefson: This is such a tremendous loss. I got to do a rock’n’roll fantasy camp with him in Las Vegas a few years back. What an amazing bassist and legacy.

**Dave Mustaine: **Truly in the sunshine of your life now. Rest In Peace.

Leslie West: I had the honour of playing with him in West Bruce and Laing. I was hoping somehow that we might have gotten together one last time. Rest in Peace my friend.

**Mike Portnoy: **I had the honour of jamming with him a few years ago – a memory I will always cherish! One of the legends.

**Living Colour: **Every guitarist should pick up their guitar and play the opening riff to Sunshine Of Your Love before the sun goes down today.

Bruce Kulick: Jack was a tremendous talent. I jammed with him and met him.

Bernie Torme: For me the best bass player ever, an unbelievably great singer, a great writer, and an all round 100% genius musician. Cream with Jack gave me my ongoing love of the three-piece band format, before I had ever heard of Jimi Hendrix. Jack inspired me through all his changes. The last time I saw him was at a jazz festival in surrey, where he once again blew me away with his playing, singing, and total channelling of the music and the moment. My deepest sympathy goes out to his family and friends. What a loss for us all.

Saxon: RIP to the Legendary Jack Bruce. Our love and thoughts are with his family, friends and fans around the world. You will be greatly missed.

**Motorhead: **RIP to Jack Bruce. You will be missed.

Abbey Road Studios: Jack will be fondly remembered by everyone at the studios for his kindness, his wicked sense of humour and his legendary impromptu performance of Sunshine Of Your Love at the Abbey Road staff Christmas party. Our thoughts are with his family at this difficult time.