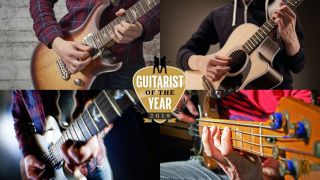 The search is now on to find the Guitarist Of The Year 2019.

The competition gives players across the globe the opportunity to show off their skills to a star panel of judges, with the aim to be crowned Guitarist Of The Year 2019.

The finals will take place at the UK Guitar Show in London on September 21 and 22 – a weekend which also sees the return of World Guitar Day.

Special guitar prizes will also be up for grabs supplied by sponsors PRS and Takamine, along with a year’s supply of Ernie Ball strings.

Last year’s winner Gabriel Cyr reports that since clinching the Guitarist Of The Year accolade, he’s had an increase in his profile.

He tells Music Radar: “I had a few interviews with the biggest radios and TV channels in Quebec and I also had a full page in the newspaper. It helped me and my band Universe Effects to promote our last album Desolation and my YouTube channel now has 36,000 subscribers.

“Before Guitarist Of The Year I only had 300. I’ve also started to do some clinics in Quebec.”

To enter the competition, upload a video of you playing to YouTube and fill out the entry form over at Music Radar between now and 23.59 (BST) on July 3, 2019.

Further information is also available over at Music Radar.