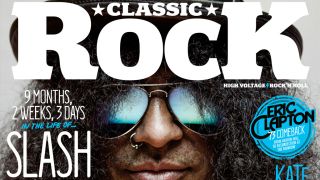 Classic Rock 201 may be a little lighter than last month's bi-centennial extravaganza, but it's no less packed with the great and good of rock'n'roll. It includes two (TWO!) free CDs, Slash's personal diary from the year new album World On Fire took shape, and a helluva lot more besides. Included in its legend-stuffed pages are the following...

The Ultimate Autumn Preview: Albums, tours, films… The 20 most important events to rock your world before the end of the year. Including…

Slash: Gigs with Aerosmith, jamming with Billy Gibbons, saving dolphins… Oh, and a new record – a Classic Rock Fanpack, in fact – imminent. Somehow the father-of-two juggles it all, as this exclusive ‘Slash’s Diary’ reveals.

AC/DC: Frontman Brian Johnson on how their latest album in a 40-year career is a tribute to “fighter” Malcolm Young.

The Gaslight Anthem: A year ago Brian Fallon was ready to quit, thinking his band had become mere walk-on players in the shadow of their influences. A change was needed. Meet the new band, not the same as the old band.

**Pink Floyd: **As surprises go they don’t get much bigger: coming round the bend is their new album, The Endless River.

Faith No More: Bassist Billy Gould tells Classic Rock that a brand new album may well be on the horizon.

Kate Bush: Wuthering Heights, global superstardom, record company skirmishes and doing things her way. But after just one tour, she retired from the stage. Until this month.

The Angels: In the early 80s they were Australia’s biggest band and had the world at their feet. But their meteoric rise and tragic fall is a tale littered with chaos, controversy and death.

Chris Squire: From LSD ‘death’ to CEO of 30-million-selling Yes, the former choirboy is the band’s ever-present member who’s kept the music coming out and the money coming in.

Twin Atlantic: Lauded as the Scottish Foo Fighters, with their new album The Great Divide it might just be time for them to become the global behemoths to rival Dave Grohl’s band.

What’s on your two free CDs

**Bright Sparks: **They came, they played, we listened, and now we present the latest choice cuts from all shades of the new rock community, including Scorpion VS Tarantula, Heavy Necker, Ghost County, Tipi Valley, The Deaf Commission and more…

The Trews: Free with this issue, the 11-track self-titled fifth album from Canadian alt.rockers The Trews was inspired by failed relationships, terminal illness and chat-room trolls. Includes the tracks Rise In The Wake, Age Of Miracles, In The Morning, What’s fair Is Fair, Living The Dream and more

The Dirt: New Toto album on the way; music venues under threat – what can you do?; win gear by designer-to-the-stars John Varvatos… say hello to The Golden Grass and Preachers Son; welcome back Accept, The Muffs and Midge Ure; goodnight Johnny Winter, Tommy Ramone…

The Stories Behind The Songs — Bonnie Dobson: You might not recognise the name, but you’ll know Morning Dew, the first song she wrote. It’s been covered by everyone from Jeff Beck to Nazareth to… Einstürzende Neubauten.

Q&A — Walter Trout: He was mere days away from death. But thanks to a liver donor and fans, the bluesman now has a miraculous second chance.

Fly On The Wall — Eric Clapton’s 1973 comeback concert: By mid-1971, the man once known as ‘God’ was a recluse with a heroin habit – and a shotgun barrel in his mouth. Friends including Pete Townshend and George Harrison intervened to save his life.

Buyer’s Guide — Michael Schenker: From teenage Scorpion to UFO, MSG and beyond, the guitar hero has had both hands in some of hard rock’s great albums.

Letters: Got something to say? Let us hear it – shout it out loud!

Lives previews: Gig previews from The Hives, Fields Of The Nephilim and Martin Barre, plus gig listings – who’s playing where and when.

Heavy Load — Mikael Åkerfeldt: “I grabbed a record label exec and poured a bottle of vodka in his face.” The Opeth man on drink, drugs and democracy.

If your newsagent isn’t selling issue 201 of Classic Rock, you can order it online from MyFavouriteMagazines.